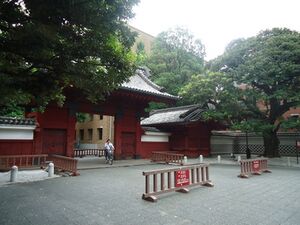 The main kami-yashiki mansion of Kaga han in the Hongô neighborhood of Edo covered more than 100,000 tsubo (roughly 267 acres), filled with warehouses, barracks, residences, gardens, and schools, and inhabited by as many as 30,000 people.[1] The space is today the main campus of the University of Tokyo. The famous red gate (akamon) still standing on the university campus was originally built in 1827 for the occasion of the marriage of Kaga daimyô Maeda Nariyasu to Yôhime, 21st daughter of Shogun Tokugawa Ienari.[2] The gate, originally known as the goshudenmon, was designated an Important Cultural Property in August 1950.[3]

The lord of Kaga han typically arrived in Edo with an entourage of 8,000, leaving roughly 4,000 behind afterwards to help manage his estates.

The grounds of the kami-yashiki also included Ikutoku-en, regarded as one of the most beautiful gardens in Edo.[4] The garden, given to the Maeda by the shogunate following the successful siege of Osaka in 1615, was built up considerably under Maeda Toshitsune, and later by Maeda Tsunanori. It features a pond, originally constructed in 1638, cut in the shape of the kanji for kokoro (心, "heart"); the pond was later made famous as "Sanshiro Pond" by novelist Natsume Soseki.[4]

While the lord resided at the kami-yashiki, the domain maintained three other mansions in the city. The naka-yashiki ("middle mansion") in Komagome covered over 20,000 tsubo, and the shimo-yashiki ("lower mansion") at Itabashi covered nearly 200,000 tsubo. A kakae-yashiki at Fukagawa, meanwhile, covered less than 3,000 tsubo, and served mainly to manage areas of rice fields which contributed to supporting the feeding and funding of the other mansions.[5] Between the three mansions, the Maeda employed some 1,000 servants and attendants in total.[6]

The Akamon was relocated some fifteen meters to its current location in 1903, in conjunction with the construction of a medical school. It is the only surviving red-painted gate of its type, the others having all been lost in fires, earthquakes, or otherwise. The roof tiles include ones bearing the kamon crests of the Tokugawa and Maeda clans, and ones displaying the kanji character 「学」(gaku) as in daigaku, meaning "university."[3]