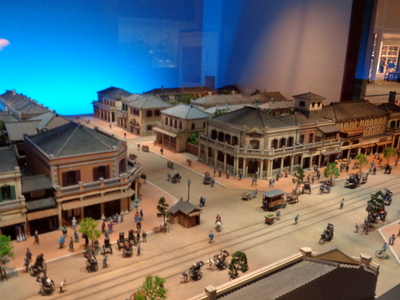 A model of the Ginza as it appeared in the 1880s, on display at the Edo-Tokyo Museum

Ginza is a neighborhood in Tokyo known for its expensive high fashion brands and often compared to New York's Fifth Avenue. Ginza is also home to the Kabuki-za, the chief kabuki theater in the world.

The neighborhood takes its name from the silver mint (ginza) established there in 1612, being moved from Fushimi, where it was previously established in 1598.

Ginza was transformed into a rather modern commercial district as early as 1872, with funding and planning from the Meiji government. Shinbashi Station, the railroad gateway to Tokyo for anyone coming from Yokohama, opened in that year and lay just south of the Ginza, while the Foreign Concessions in Tokyo lay just to the east. A tree-lined central boulevard, flanked by gas lamps, arcades, the first sidewalks in Japan, and two-story Georgian-style brick buildings, a "showcase"[1] of Tokyo's modernity, was completed in May 1877.