From SamuraiWiki
(Redirected from Jurakutei)
Jump to navigationJump to search 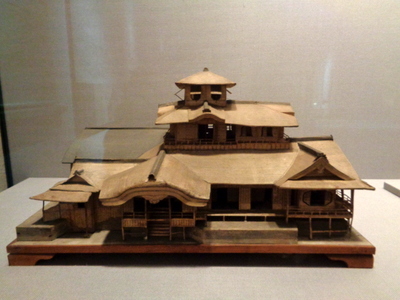 A 19th c. paper model on display at the Tokyo National Museum, of the Hiunkaku ("Flying Cloud Tower") from the Jurakudai, now at Nishi Honganji

The mansion was lavishly decorated, with paintings by many of the greatest artists of the day, including Hasegawa Tôhaku, Kanô Eitoku, and Kanô Mitsunobu, and was one of several locations of Hideyoshi's golden tearoom, which was otherwise often housed at Fushimi castle.

Hideyoshi formally received Emperor Go-Yôzei at the mansion in 1588.

Hidetsugu took up residence at the Jurakudai in 1592, and officially received Emperor Go-Yôzei there again the same year. Hidetsugu was forced by his uncle to commit suicide in 1595. Following his death, the mansion was dismantled. Many elements of the mansion survive today at other sites; one of its buildings is now the hôjô (abbot's quarters) at Daitoku-ji, while gates from the Jurakudai survive at Daitoku-ji, Nishi Honganji, and Myôkaku-ji. One of the mansion's foundation stones is at Ryôgen-in today.