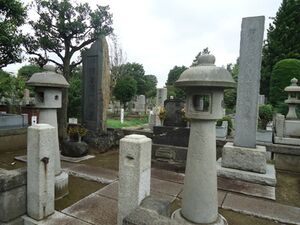 The graves of Nakahama Manjirô and his relatives, at Zôshigaya Cemetery in Tokyo

John Manjirô is among the most famous of 19th century Japanese castaways, and one of the first Japanese to ever travel to the United States.

Originally from Nakahama village, Tosa province, Manjirô and five others in his fishing boat drifted out to sea on 1840/1/5. Dashed up upon some rocks and stranded, he survived in a cave for some time, eating mainly fish, until he was found and rescued by an American whaling ship the following year. They brought him back with them to Hawaii and then to Massachusetts, where he learned English, Western techniques of navigation, whaling, and coopering (the making of barrels), before returning to Japan in 1851. On this return voyage, he and two of his compatriots were first brought by an American ship to Mabuni, near the southern tip of Okinawa Island, then aboard Kagoshima domain vessels to Kagoshima.[1] The three were then conveyed by Kagoshima to Nagasaki, where they were imprisoned and interrogated by Nagasaki bugyô Maki Yoshinori,[2] and then returned to Tosa han.[3]

In Tosa, Manjirô was made an instructor at the Kyôjukan domain school, was given a one-person stipend, and was granted use of the surname Nakahama.[4] In late 1853, he was granted an official position by the shogunate as a fushin yaku (public works official, or construction official).[5] He would later serve as an interpreter during the shogunate's encounters with Commodore Perry.

Manjirô's experiences in the United States are recorded in a volume titled Hyôkyaku danki (漂客談記), which he dictated.[6]