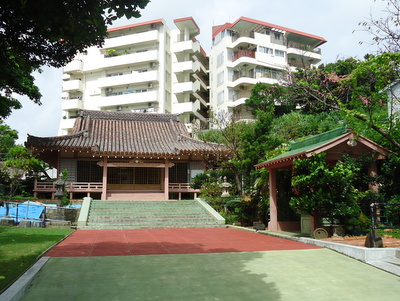 The main hall of Jintoku-ji

Jintoku-ji is a Shingon Buddhist temple in the Asato neighborhood of Naha, on Okinawa Island. It was established in the late 1460s by King Shô Toku, and is closely associated with the Azato Hachiman Shrine located nearby.

Though the temple was relocated to the site of Oki Shrine, elsewhere in the city, from 1908 until its destruction in 1945, it has since been rebuilt near the Hachiman Shrine.