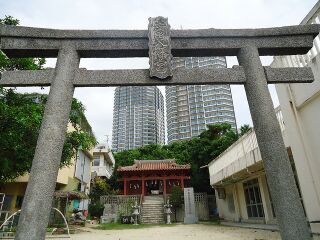 Azato Hachiman-gû is a Shinto shrine in the Azato neighborhood of Naha, on Okinawa Island. One of a group of the eight most important shrines in Okinawa, it appears in numerous historical sources, including the Kyûyô, Ryûkyû shintô ki, and Ryûkyû koku yurai ki.

The shrine was established in 1466, during King Shô Toku's campaigns to conquer Kikaigashima. He believed in a promise or agreement with the war god Hachiman that if he could shoot down a bird with a single arrow, he would successfully subjugate the island, and if not, then his campaign would fail. After successfully shooting down the bird, he established a shrine to Hachiman on that spot. Originally built in the village of Mawashi (now part of Naha City), the shrine was originally dedicated to the gods or spirits of Hachiman (Emperor Ôjin), Empress Jingû, Ôyorihime, and Kumano Gongen. It featured a sacred bow & arrow, helmet & armor, and floating bell as its chief objects of worship.

Today, the main hall (honden) is the only building on the site. It is built in a style called sanja-zukuri or sankensha, three by two bays in size, and with irimoya roofs. The Buddhist temple Jintoku-ji used to be incorporated into the same site, but was separated out and relocated to the site of Oki Shrine in 1908. After all these shrines and temples were destroyed in the 1945 Battle of Okinawa, local people built their own temporary unofficial Azato Hachiman shrine, and held annual festivals there. Through the efforts and contributions of members of the community, the Hachiman Shrine was more fully, properly rebuilt in 1993; the rebuilt Jintoku-ji stands just down the street.