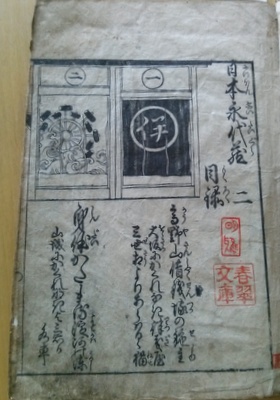 The first page of the table of contents of the second volume of Nihon eitaigura, featuring noren curtains designed by Saikaku himself

Saikaku was born heir to a major merchant household in Osaka, and went on to become head of the household and of the family's commercial operations. However, after the death of his wife, he allowed the head clerk of the business to oversee operations, devoting his own time to poetry, literature, and adventures in the pleasure quarters. He was an active member in local cultural circles, and often took part in poetry circles and social gatherings; on one day in 1684, he engaged in a sort of fun challenge, in which he composed 23,500 verses of renga poetry in a single 24-hour period at the Sumiyoshi Shrine in Osaka.

His book Kôshoku ichidai otoko ("Life of an Amorous Man") is said to have had a particularly significant impact on Japanese publishing. Prior to the 1680s, the Kamigata (Osaka & Kyoto) and nascent Edo publishing worlds were quite separate. However, after Kôshoku ichidai otoko was first published in Osaka in 1682, it was so popular that within two years, it was being published by Edo publishers, with alterations. The original Osaka publication was a large-sized ôban book, but it was now being published in Edo in the smaller hanshibon size, often with the title changed, with different illustrated inserts, or with other changes made; and this was done with Edo publishers receiving no permission, and keeping all the profits. At the same time, in 1684, Saikaku's Jizô bosatsu rishôki became the first santobon, a book published in all three cities, through arrangements between publishers in the three cities (as opposed to being published in multiple cities through piracy). This represented a significant shift, as books for the first time began to be produced, and distributed, for a national market, rather than only for the regional (Kamigata or Edo) markets. Kôshoku ichidai otoko was republished in Osaka in 1685-1686, and before long, many Kamigata publishers opened branch shops in Edo, hired Edo-based merchants to serve as their proxies, or made arrangements or partnerships with Edo publishers, to produce and distribute santobon. Many of these books continued to be produced in Kamigata and only sold (not produced) in Edo; but, others began to be published in both regions. Saikaku's Nihon eitaigura was originally produced in three versions, with opening pages catering specifically to the Kyoto, Osaka, or Edo reader. A new edition was then produced shortly afterwards which omitted these city-specific sections, and was thus more fully accessible to readers from anywhere in the realm.[1]

Many of Saikaku's books remain prominent examples of Edo period literature today, and in their original publications included illustrations by many of the most prominent ukiyo-e artists of that time, including Hishikawa Moronobu, Yoshida Hanbei, and Nishikawa Sukenobu.

Many of Saikaku's works have been translated into English.