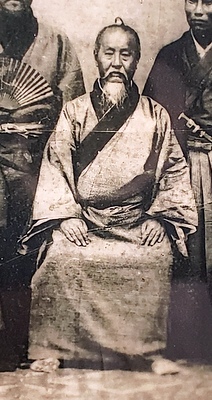 Prince Ie in a photo of the heads of the 1872 embassy.

Prince Ie Chôchoku was the fifth son of King Shô Kô of the Ryûkyû Kingdom. He played a prominent role in internal court politics of the kingdom in the 1860s, and led a mission to Tokyo in 1872 to formally pay respects to the Meiji Emperor on behalf of his nephew, King Shô Tai.

As a child, he was regarded as mere nobility, and not royalty. However, following the death of his father, King Shô Kô, in 1834, the young Chôchoku (then age 16) was adopted into the house of the anji of Ie, and was raised to the rank of "prince" (O: wuuji). The following year, he was appointed sô-jitô over Iejima, and took on the title of "Prince Ie."

After the Makishi-Onga Incident of 1859, in which a number of high-ranking officials were accused of conspiring with Satsuma han officials behind the back of the royal court, Prince Ie led the investigation as kyûmei sô bugyô (Chief Investigation Magistrate), putting pressure on the pro-Satsuma faction at court.[1]

In July 1872, Prince Ie was named lead envoy on an embassy that would travel to Tokyo to pay respects to the Meiji Emperor. The following month, he was named Sessei (the top administrative position within the Ryukyuan government).[2]

He traveled to Tokyo in 1872 alongside Giwan Chôho and 35 others, meeting with the Meiji Emperor on 9/14, and being formally told that the kingdom was to be annexed by Japan as Ryûkyû han, and that King Shô Tai was to become "king" of that domain. While in Tokyo, he also attended the formal ceremony for the opening of Japan's first railway, connecting Shinbashi and Yokohama. The embassy arrived back in Naha on 1873/3/3 after being briefly castaway on Kikaijima earlier that year, while sailing from Kagoshima to Okinawa.[3] Following his return to Ryûkyû, Ie was named sessei (prime minister, or regent).

Prince Ie was admitted to the kazoku (Meiji Japan's European-style nobility) in 1890 as a Baron (danshaku). He died six years later, at age 79.