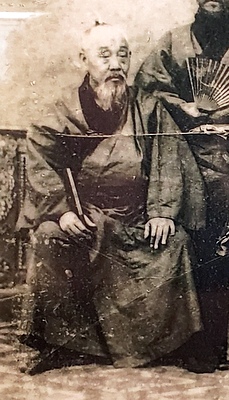 Shô Yûkô Ginowan ueekata Chôho[1], also known more simply as Giwan Chôho, was a Rykyuan government official and emissary; at the time of the Meiji Restoration in Japan, he was a member of the Sanshikan, the Council of Three top government ministers in the Kingdom of Ryûkyû.

Giwan was the representative of the kingdom tasked, in 1872, with conveying to the king & his fellow ministers the Tokugawa shogunate's orders that the kingdom be abolished, and its territory annexed by Japan.

He is also known as one of the most prominent or celebrated Ryukyuan waka poets of his time[2][3]. A poet of the Keien style, one notable collection of his poetry is known simply as Okinawa-shû.[4]

Giwan was born in Shuri[2] to a branch family of Shô Oroku-udun[3], and inherited from his father Ginowan magiri as his domain, along with the title of Ginowan ueekata ("Lord of Ginowan") in 1835. His title was changed further to "Giwan ueekata" in 1875 when the king's second son Shô In was named "Prince of Ginowan" (宜野湾王子, Ginowan Ôji)[5].

Chôho served many years in the bureaucracy, and was dispatched on missions to China and Japan on a number of occasions. He served as a member of the Council of Fifteen,[3] was named to the Sanshikan in 1862[2], and on account of his experience, continued to lead missions overseas.

The Tokugawa shogunate fell in Japan in 1868, to be replaced by a new Imperial government. Three years later, an incident in which a number of Okinawans, shipwrecked on Taiwan, were killed by natives there developed into disputes between the Japanese Imperial government and that of Qing Dynasty China over sovereignty or suzerainty over Okinawa. After discussions in the Okinawan royal capital of Shuri with Japanese representatives of Satsuma han, the Japanese government summoned King Shô Tai to Tokyo to further discuss the political status of the Kingdom of Ryûkyû vis-a-vis Japan. So as to not imply his subordination to the Meiji Emperor by appearing before him himself, Shô Tai feigned illness and sent a mission on his behalf, led by his uncle Prince Ie, with Giwan Chôho as vice envoy[6][3].

The mission was also to serve to officially present congratulations from the kingdom on the occasion of the birth of the new Imperial Japanese government[2]. Similar missions had journeyed to Edo in the past, on the occasion of the accession of a new shogun. As had occurred on the occasions of such previous missions, Giwan and his party presented a number of gifts to the Japanese, and were well received and well-treated. The ambassadors took part in a variety of activities organized by the Ministry of Foreign Affairs, including meeting with Ainu chiefs and attending the opening of the first railway in Japan[6].

On October 14, 1872, the ambassadors were presented with an imperial decree, stating that the Kingdom was to become Ryûkyû han, a province or prefecture within the Japanese nation, with Shô Tai as governor[6]. While this brought to an end the identity of the kingdom as an independent (or semi-independent) foreign nation, and the absorption of the islands into the Japanese state, it also meant an end to over 250 years of the kingdom's subordination to Satsuma.

Giwan and his party returned to Okinawa with this news, and a new mission was sent presently to Tokyo to work out details of this new political arrangement[7], while Giwan remained at Shuri.

For a brief time, it seemed that Ryûkyû was to enjoy a newfound degree of self-rule, with Shô Tai serving as governor of the domain[8].

However, several years later, in 1875, Giwan, along with a number of other government ministers and royals, received a mission led by Matsuda Michiyuki, Chief Secretary of the Home Ministry. Matsuda oversaw the implementation of a number of wide-ranging political changes and other systematic changes concordant with the incorporation of Ryûkyû into Japan, including the establishment of a permanent military garrison in the Ryukyus. Giwan was severely criticized by Kamekawa Seibu and other members of the anti-Japan Ganko-tô ("Stubborn Faction"), as were a number of officials who had negotiated with the Japanese or accepted their terms, and he was ultimately forced to resign from public office.[9]

He retired to the countryside, and died the following year[2].