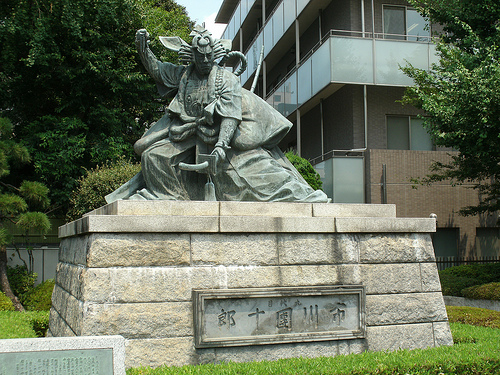 Bronze sculpture of Ichikawa Danjûrô IX as the hero from Shibaraku, in Asakusa

Ichikawa Danjûrô IX was a leading kabuki actor of the bakumatsu and Meiji periods, and the creator/founder of the experimental katsureki mode of more realistic jidaimono (historical) plays.

Like most kabuki actors, and many artists, of his time, Danjûrô had a number of names. His birth name was Horikoshi Kaoru, and later Horikoshi Hide. He was the ninth to be called Ichikawa Danjûrô, and like his predecessors, his yagô was "Naritaya." Other names he used on stage include Kawarazaki Chôjûrô I, Kenjûrô, and Kennosuke. In poetry circles, he was known as Sanshô, Shisen, or Dansu, among other haimyô (poetry names).

Born in Edo, he worked for spans as the head of each of Edo's main theatres - the Ichimura-za, Kawarazaki-za, Shintomi-za, and Kabuki-za - in addition to performing onstage. He is said to have been talented at every type of role, but excelled especially in jidaimono. He was especially famous for his roles as Benkei and in the play Dôjôji.

Danjûrô pioneered the form known as katsureki, history plays performed in a more realistic and less stylized mode; though the form did not gain incredible popularity, and stylized kabuki remains the norm today, his katsureki remain models to which current actors and dramatists look.

He took on the name Ichikawa Danjûrô in a ceremony at the Kawarazaki-za in July 1874.[1]

Danjûrô is said to have been quite talented at writing and painting as well, and enjoyed fishing and antiques. He died at the age of 66, in 1903.