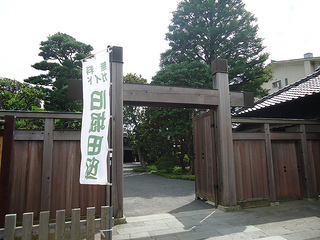 Main gate to the mansion compound 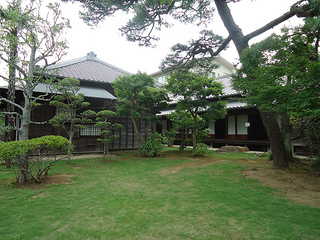 One section of the mansion, as seen from the garden

The kyû-Hotta-tei is a Meiji period mansion in Sakura, Chiba, built in the style of daimyô mansions of the Edo period. It was built by Hotta Masatomo, the last lord of Sakura han, in 1890, in anticipation of his return to Sakura from Tokyo. Designated as a national Important Cultural Property, it is one of the best preserved traditional-style daimyô residences in the country.

The house and its gardens today cover roughly one-third of the original 30,000 tsubo (99,000m2 or 990 acres) of the property, which at that time included Masatomo's agricultural experimental station.

The main portion of the residence consists of five interlinked single-story wooden buildings, with one two-story section. The main portion of the house included entrance halls where guests were initially received, the offices of the house manager and manservants, a kitchen, and living rooms & bedrooms, with further living rooms and waiting rooms on the upper floor. While the entire house is in an Edo period style, with tatami floors, sliding doors, and wooden structure, the living rooms contain some lavish Meiji period decorative elements, including paintings by contemporary Meiji period painter Atomi Kakei, and the ceiling of one room upholstered with Indian chintz.

Two smaller buildings, linked to the main building by covered corridors, contained studies, a drawing room for receiving high-ranking guests, and waiting rooms for attendants and servants. Living quarters for female servants were once attached to the kitchen, but are no longer extant. A bathhouse was added in 1911 when Masatomo hosted the Crown Prince Yoshihito. Many of the buildings on the compound have thick plastered walls for fireproofing; toilets were generally located behind the tokonoma in each room. Most of the house is open to the public, but the study and second floor are not.

Much of the house was organized with the reception of guests of varying ranks in mind, and the logistics of providing for servants and attendants to wait on the Hotta family and their guests. Three separate entrances (originally five) were used by different individuals, on different occasions. The main entrance was used only by the head of the family and high-ranking guests, or by others during occasions such as marriages and funerals. Regular guests used a second entrance, while women of the family, other family members, merchants, and servants used a side entrance.

The mansion's garden combines the Western element of a sprawling lawn with stone lanterns, well-placed rocks, pines, cypresses and other elements of traditional Japanese gardens.