From SamuraiWiki
(Redirected from Honnoji)
Jump to navigationJump to search 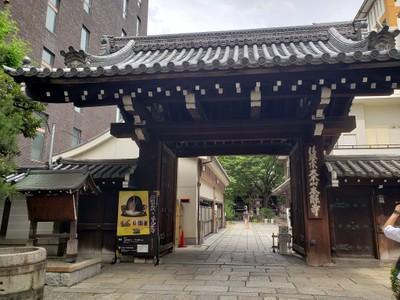 Honnôji is a Buddhist temple in Kyoto most famous for the 1582 Honnôji Incident in which Oda Nobunaga died. The temple was rebuilt in a new location shortly afterwards.

Honnôji is the head temple of the Hokke Hommon sect of Buddhism. It was founded by Nichiryû, a disciple of Nichiren in 1415 at a site on the street Aburanokôji. This temple, originally named Hon'ôji (本応寺), was destroyed in 1433. Another temple, known as Rokkaku Taigû, was moved to the site in order to rebuild/reestablish the Hon'ôji, now renamed Honnôji.

At its height, Honnôji boasted 30 residences within a large temple complex. It was destroyed in a fire in the 1536 Tenbun Hokke Incident, but was rebuilt in 1547-1548.

Oda Nobunaga made the extensive temple complex his temporary residence, but was attacked there on 1582/6/2 by the forces of his turncoat retainer Akechi Mitsuhide, who surrounded the temple with 13,000 men.[1] Mitsuhide betrayed his lord, forcing Nobunaga to commit suicide, and then burning the temple to the ground. Oda Nobutaka rebuilt the temple on the same site afterwards, but Toyotomi Hideyoshi then moved the temple in 1589 to a new location, at Teramachi-Oike.

During the Edo period, Honnôji served on at least one occasion to house Korean embassies to Edo. In 1719, the 9th Edo period Korean mission, consisting of 475 people, came to Japan on the occasion of the accession of the 8th shogun, Tokugawa Yoshimune. While 129 of them stayed in Osaka, the remaining 346, along with the Lord of Tsushima han and others acting as a protective escort, passed through Toba Jisô-ji from Yodo and entered the capital (Kyoto) on 9/12, staying for one night at Honnôji. The lead ambassador and others stayed in the main hall (hondô), while the translators stayed in the Kichijô-in, and various higher officers stayed at Renshô-in, a sub-temple. Honnôji records indicate that the abbot and other monks of Honnôji left for other temples during this time. That night, the Kyoto shoshidai, Matsudaira Tadachika, and others came to offer greetings, and a banquet was prepared on the orders of the shogun. The chesulgwan (製述官, chief composer of documents for the mission) Shin Yu-han, in his diary Haeyurok (海遊録), wrote of Honnôji that "nothing can compare in splendor/magnificence". On the return to Kyoto from Edo, the embassy stayed at Honnôji again, from the first until the third of the first month. Members of the Tsushima han Sô clan escort and other samurai escorts stayed at other nearby temples and private homes.

In the 1850s, lord of Hikone han Ii Naosuke stationed a number of his troops at Honnô-ji for a brief time, as part of his contribution to efforts to guard the city against potential foreign incursions.[2] A number of prominent figures, including Rôjû Hotta Masayoshi in 1858, and lord of Ôgaki han Toda Ujiakira and heir to the lord of Hiroshima han Asano Nagakoto in 1863, also stayed there.[3]

Honnôji was destroyed by fire once again, in the mid-19th century, and was rebuilt in 1928. The monk Nisshô and painters Urakami Gyokudô and Urakami Shunkin are among the historical figures buried there.