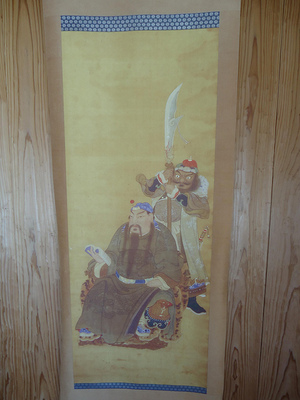 A painting of Guan Yu (or, Guān dì wáng) by Higa Kazan, on display at the Okinawa Prefectural Museum

Higa Kazan, also known as Seisei, was a prominent Okinawan painter of the Meiji period, known especially for his pictures of genre scenes, many of which survive today.

Born in Wakasa-machi in Naha, Higa studied painting under Sadoyama Anpô (Mô Eiho). In 1908, at the first exhibition, he participated in the formation of the Tansei Association.

His surviving works include paintings of Guan Yu, Daruma, Okinawan wedding ceremonies, and simply of Okinawan men and women in traditional clothing.