From SamuraiWiki
(Redirected from Daruma)
Jump to navigationJump to search

An ukiyo-e painting by Hokusai, depicting Daruma with a courtesan. 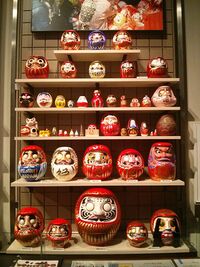 Daruma dolls on display at the National Museum of Japanese History

Bodhidharma was an Indian monk, regarded as the founder and First Patriarch of Zen Buddhism. Little is known of his historical life, but numerous legends are told about him. In Japan, he is known as Daruma, and is a somewhat comical figure.

Bodhidharma is said to have introduced Zen (C: Chán) Buddhism to China in the 6th century CE, and is counted the first patriarch of Zen. However, he is also considered the twenty-eighth generation down from Maha Kashyapa, a direct disciple of the historical Buddha, known for being the only one to grasp the true significance of a lecture given by the Buddha wordlessly, by simply holding up a flower.

Among the many legends about Bodhidharma, he is said to have at one time meditated in a cave for nine years, earning the sobriquet in Japanese kunenbô ("Nine-Year Monk"). Though he gained enlightenment through this lengthy meditation, it is said that his legs atrophied terribly. In legend and folk culture, his legs are often said to have fallen off entirely, inspiring various paintings and folk crafts depicting Daruma as a roly-poly and not so humanoid form.

Daruma in Folk and Traditional Culture

Highly caricatured daruma figurines, in the form of red spheroids with a human face, are a traditional toy and folk talisman. They often come without the eyes painted in; one is meant to make a wish, or set a personal goal, while painting in one eye, and then paint in the other when the wish comes true, or when the goal is met.

During the Edo period, it became a popular mitate humorous conceit to depict Daruma juxtaposed with the courtesans (prostitutes) of the Yoshiwara. In some of these works, Daruma simply accompanies a courtesan. In others, he dresses in a courtesan's robes, or she in his. Ukiyo-e woodblock prints also include images of Daruma traveling to the Yoshiwara in a poled boat, and ones of him pulling himself out of a painting, or simply taking an active peek from within a painting of courtesans in the room. In a lavishly painted hanging scroll by Hokusai, Daruma is painted entirely in shades of vermillion, implying him to not truly be present, but perhaps to be a reflection of a facet of the courtesan's identity. Though the precise reasons for including Bodhidharma - and only very rarely any other religious figure - in such images remain unclear, the tongue-in-cheek parallels drawn are numerous. For one, much like Daruma meditated for nine years, courtesans were typically indentured for ten years. Their servitude, restricted to the pleasure quarters and isolated from both family and society, was through these images compared in a tongue-in-cheek way to a monastic retreat or seclusion, and further, since Zen allowed that meditation could be found through extensive performance of any practice, from sword techniques to Noh to ikebana, could not expertise and extensive experience at sex count as meditative activities? Roly-poly Daruma dolls, weighted so they would always right themselves when they were pushed over, were also humorously compared to courtesans, who, after lying with a customer would get right back up. The story of Eguchi, a prostitute who turns out to be the bodhisattva Fugen in disguise, follows similar themes.