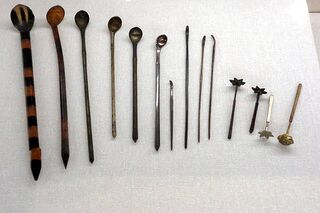 Hairpins were commonly worn by both men and women in the Ryûkyû Kingdom, and were a marker of social status; only the royalty and aristocracy were permitted to wear hairpins of gold or silver, while commoners wore hairpins of a variety of other materials, including copper, brass, wood, coral, and fish bone, and more rarely, buffalo horn or tortoise shell.

The practice of wearing one's hair up with large hairpins seems to date back many centuries in the Ryûkyû Islands, perhaps truly to ancient times. A system of rank as indicated by hairpins was also introduced by King Shô Shin in 1509, around the same time as the hachimaki (colored court cap) ranking system, but did not fully settle into the gold, silver, brass system more standard in later periods until the 17th century.[1]

Only members of the royalty and the anji (the highest ranks of nobility) wore solely gold hairpins. The Sanshikan (the three highest officials in the government) wore a combination of gold kami-sashi hairpins (stuck in from the front) and silver ushi-zashi hairpins (stuck in from the back). Other high-ranking nobles, with the rank/title of ueekata, wore silver hairpins for both, though their kami-sashi could have gold heads. Lower-ranking nobles wore hairpins of only silver (without gold portions).[2]

Women of the royalty and aristocracy wore particularly elaborate hairpins at times, with ornaments in the form of dragons or flowers. Boys of royal or aristocratic birth who had not yet come of age wore their hair similarly; those who traveled to Kagoshima or Edo as performers (known as gakudôji) were particularly renowned in Japanese sources for their beauty. The largest and most elaborate golden hairpins were worn by the king, queen, kikoe-ôgimi, and other top-ranking members of the royal family.

However, the majority of hairpins worn even among the royalty and aristocracy were not elaborate at all, but were quite simple. Women's hairpins (jiifaa) often consisted merely of a long spike with a spoon-like curve at one end, while men's often had simple flower forms at the ends, with different flowers representing different ranks. Dragon motifs were restricted to the king, queen, kikoe-ôgimi, and certain other members of the royalty, while the crown prince wore a hairpin topped with a gold ornament in the shape of a peony blossom (or, on special occasions, a dragon). The queen also sometimes wore hairpins with a phoenix design. A strawberry blossom head on a noble's hairpin indicated they were a royal prince, anji, or member of the Sanshikan, while a strawberry blossom bud indicated they were of ueekata rank. Lower-ranking nobles and commoners often wore hairpins with a narcissus motif.[2]

Women occasionally used an additional hairpin thrust into the side of their hair bun (chignon); this was called suba-sashi ("side thrust"). Even such simple hairpins were considered the products of fine craftsmanship, and members of the Matayoshi (O: Mateeshi) family served as designated hairpin-makers for the court for generations. The family traces its tradition to a man known as Matayoshi Tôiki (O: Mateeshi Tôichi, lit. "Matayoshi going to China"), who is said to have learned metalworking (O: kan-zeeku) in China; his successor to the family trade was then brought into the service of the court.[3]