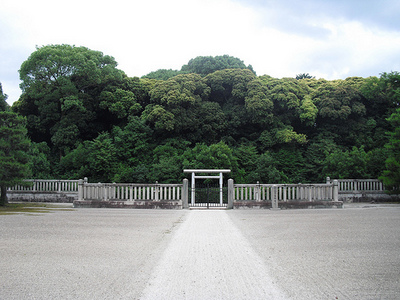 The tomb-mound of Emperor Kammu, in Fushimi.

Emperor Kammu (r. 781-806) reigned over the establishment of Kyôto, then known as Heian-kyô, as the capital of Japan. He is thus one of the most important emperors in history - Kyoto would remain the imperial capital for over 1000 years after his death.

He succeeded his father, Emperor Kônin, to the throne in 781.

Ten years prior to the establishment of Heian-kyô, Kammu also presided over the moving of the capital first to Nagaoka-kyô from Heijô-kyo (today known as Nara), which had been the capital for the previous 74 years or so. These moves away from Nara, it is said, were spurred mainly by a desire to distance the seat of secular power from that of the major Buddhist temples; it was for that reason as well that Kammu strictly limited the construction of major temples in the new capital for a time.

His reign saw battles against the Emishi (natives to the north), meaning further expansion and/or securing of the borders of the state; he also sponsored the journeys of Saichô and Kûkai to China - they returned to found the Shingon and Tendai schools of Buddhism, and to become hugely prominent Japanese historical figures.

Emperor Kammu is buried in Fushimi; just over 1100 years later, in 1912, the tomb of Emperor Meiji was established nearby.