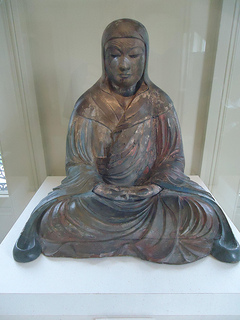 Saichô was the founder of the Tendai sect of Buddhism in Japan.

He is said to have been of mixed Chinese and Japanese parentage.[1] A monk who left the urban Buddhism of Nara to become a recluse on Mt. Hiei, Saichô built a small shrine in 788. He was sent by the Emperor Kammu with a Japanese embassy to China under Fujiwara Kadonomaro, to study in China in 804. He returned in 805 to found the Tendai Lotus sect of Japanese Buddhism. His small monastery, the Enryaku-ji, on Mt. Hiei was enlarged, and grew steadily in power and influence over the centuries, until it was nearly eradicated by Oda Nobunaga in 1571.