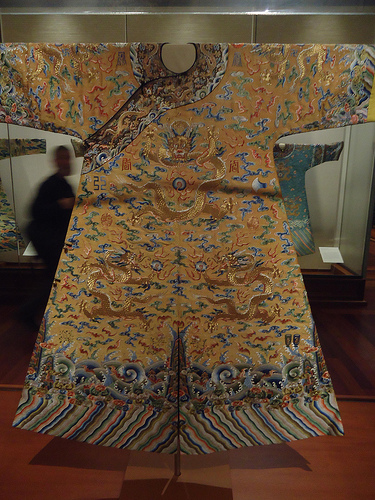 Dragon robes were lavish silk garments bestowed by the Chinese Emperor to the royalty of China's tributary states, most prominently Ryûkyû and Korea, as signs of their power and authority, and of their subordination and debt to the Chinese Emperor. Though records have been found indicating that robes were given on at least one occasion to a ruler in Java and even to a Sharif of Mecca, the robes seem to have only ever been worn or otherwise used in a symbolic and ceremonial way by the kings and aristocracy of Ryûkyû and Korea; the king of Ryûkyû only ever wore the robes when receiving Chinese ambassadors, however, and wore a royal costume in accordance with Ryukyuan native tradition for all other occasions[1].

The robes were only produced in China, at the Imperial workshops at Hangzhou, Nanjing, and Shouzhou; their production in Ryûkyû, Korea, or elsewhere was forbidden by Chinese Imperial edict. After production, the robes would be brought to the Imperial capital for certification, and then to Ryûkyû, Korea, or another destination by investiture envoys, along with a golden & jeweled crown and belt, and other symbols of investiture. Robes were also sometimes obtained by Ryukyuan officials in Beijing.

The right to wear dragon robes was enjoyed not only by the king of Ryûkyû, but by the entire royal family, and by certain high-ranking families of the aristocracy as well. Chinese robes were also, on rare occasions, given by the king of Ryûkyû as gifts to others; in 1605, King Shô Nei bestowed a dragon robe from his personal wardrobe upon a prominent Kyoto monk who was about to return to Japan after a three-year stay in Ryûkyû. This same robe has since come into the possession of a group who display it during Gion Matsuri every year.

Patterns varied across the centuries, at the whim of the Chinese Emperor, but always prominently featured dragons, often directly on front, back, and sleeves, with more dragons on the skirt. The robes worn by the Chinese Emperor himself bore dragons with five claws on each hand; only the King of Ryûkyû was permitted the same, while all other royals and officials who wore dragon robes (e.g. the king of Korea) were restricted to dragons with four or three talons. The designs on the robe generally represented a celestial map, with images representative of earth and sea at the bottom, and clouds and the heavens towards the top, with a variety of Buddhist, Taoist and other symbols scattered across the composition. In the early Ming, kings of Ryûkyû were also bestowed robes appropriate to a Ming official of the second rank, with a qilin design, combined with leather hat, jade tablet, and rhinoceros hide girdle. However, in later times, the kings were granted both regular everyday court costume (C: chángfú, J: jôfuku) and formal costume for state ceremonies (C: pí biàn fú, J: hibenfuku) of the rank of Imperial Prince.[2]

The kings of Ryûkyû were granted two robes as part of their formal investiture costume, along with a silken crown, belt, and other accoutrements. One was a plain, unfigured, red robe. The other, known as a "five symbol robe," featured designs of grains of millet, water weed, a wine cup, sacrificial axes, and an abstract symbol known as fu, symbolizing both good and evil. These were five of the twelve symbols ornamenting robes worn by the Emperor of China. The other seven were the sun, moon, Big Dipper, mountains, dragon, pheasant, and fire. Crown princes of the Ming and Qing dynasties were permitted to wear nine symbols, as were the kings of Joseon and the Muromachi shoguns (recognized as "king of Japan"). This paralleled somewhat the design of crowns used or bestowed by the Ming: the Ming Emperor wore a crown with twelve rows of jewels, his princes crowns with nine rows, and the kings of Ryûkyû and Korea crowns with seven rows.[3]

Chinese records of robes given to other countries are almost completely non-existent; some vague references in Ryukyuan records seem to indicate that Ryûkyû may have first received dragon robes in 1442.[1]

Ryukyuan officials also wore robes received from China (sometimes altered)[1], or robes patterned after those of Chinese officials but produced in Ryûkyû, up until the fall of the Ming Dynasty in 1644, after which the Chinese official costume changed dramatically and Ryukyuan officials adopted a system of uniform consisting of bingata robes, a native garment style influenced by the dragon robes, for use within Ryûkyû. However, they continued to employ Ming-style robes for embassies to Edo, and for the king's use during many court ceremonies. The first Qing mission arrived in 1663, and granted permission to the king to maintain Ming styles, refraining from obliging the Ryukyuans from adopting Qing (Manchu) costume. As the king would continue to wear a Ming-style dragon robe up until the fall of the kingdom in the 1870s, Qing investiture envoys soon came to joke that the Ryukyuan king looked like he had stepped out of a theatre production, his costume being so different from what they were used to seeing outside of the historical settings of the theatre. Though examples of these Ryukyuan Ming-style robes do not survive, one bestowed upon Toyotomi Hideyoshi by the Ming court is extant, and is believed to be of very similar design.[4]

The final set of dragon robes to be bestowed upon the King of Ryûkyû were brought by Chinese envoys in 1874.