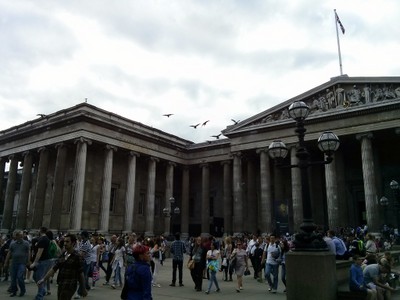 The main entrance plaza of the Museum 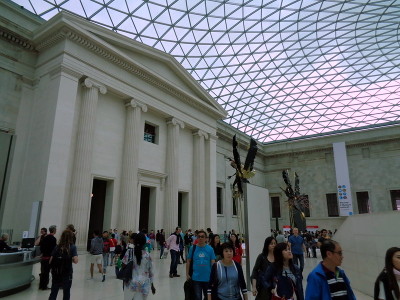 The Great Court at the British Museum

The British Museum is one of the world's oldest and most extensive encyclopedic museums of world cultures.

The museum, located in the Bloomsbury neighborhood of London, was founded in 1753 and began with a collection of 71,000 items bequeathed to the nation by Sir Hans Sloane, who died that same year. The newly-founded Museum also acquired that same year the personal collection of Chinese and Japanese prints of Dutch East India Company medical officer Engelbert Kaempfer, who had resided in Nagasaki in 1690-1692. Portions of Sloane's collection were later split off and form the core of the collections of the British Library and National Museum of Natural History, London.

In 1881, the Museum obtained the Japanese art collection of Dr. William Anderson, an instructor at the Imperial Navy Medical College in Tokyo, and named him curator.[1] Another notable collection of Japanese and other artifacts now in the Museum's collection came from William Gowland, one of the first Westerners to conduct archaeological excavations of kofun in the late 19th century.[2] Thomas Watters, Acting Consul General for the United Kingdom in Seoul from 1887 to 1888, also donated a notable collection of Asian art and artifacts to the Museum in 1888.[3]

Unlike most major art museums in the West, the British Museum's collections and displays focus primarily on history and culture rather than more narrowly on art history and aesthetics. Since 2006, the Japan Gallery has presented a chronological history of Japan through objects, displaying not only the most beautiful or otherwise artistically significant objects, but objects which help to represent key aspects of Japanese history, from kofun to Buddhism to Edo period samurai and chônin culture and foreign relations, to modernization/Westernization, urbanization, empire, war, and various aspects of the post-war period, among of course numerous other elements.