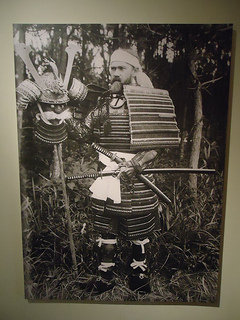 Bashford Dean was the founder of the Arms & Armor department at the Metropolitan Museum of Art. Objects he collected during several Meiji period travels to Japan formed the core of that collection.

A precocious young man, Dean entered New York's City College at age 14, completing a PhD in zoology and paleontology at Columbia University a mere ten years later. He was then hired immediately onto the faculty, and began making research trips to Alaska, Russia, Europe, and Japan. While in Japan around 1900, he began collecting Japanese arms and armor. He lent his collection of roughly 125 Japanese objects to the Metropolitan in 1903, and wrote a catalog of the associated exhibition, the most extensive publication on the subject in English at the time. He sold that collection to the museum the following year, and began collecting again, loaning objects in 1907 and selling his collection to the museum again in 1914.

The Metropolitan's collection of Japanese arms & armor was already the most extensive such collection outside Japan when, in 1905, Dean arranged for the acquisition of a number of Kofun period objects from the Tokyo Imperial Museum. Tokyo exchanged the Kofun era objects for a number of Egyptian objects obtained personally by Dean and donated to the Metropolitan for this purpose.

Dean earned his tenure at Columbia by 1904, the same year he was hired by the Metropolitan as guest curator. He rapidly rose to honorary curator, and then to department head as the Arms & Armor department was formally established in 1912. Dean made a number of trips to Japan, Russia, Alaska, and elsewhere, founding the Department of Reptiles and Fishes at the American Museum of Natural History even as he continued to work at both the Metropolitan and Columbia. His last trip to Japan was in 1917, during which time he met with numerous dealers and collectors, and added considerably to the Metropolitan's collection.

A number of his notebooks from the time survive, and are valuable records of both his travels & studies, and of the formation of the department. He also published roughly 175 papers and books over the course of his career, including groundbreaking work on arms & armor, zoology, and paleontology, among other subjects. His 1905 Catalogue of European Arms and Armor was the first book on the subject by an American, and his Bibliography of Fishes, published in three volumes in 1916-1923, won the prestigious Daniel Giraud Elliot Medal, awarded by the National Academy of Sciences, in 1921.

Dean retired in 1927, and died the following year.