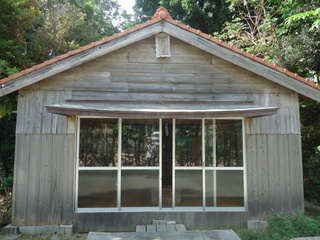 The main hall at Ameku Shrine

Ameku Shrine is a Kumano shrine located in the Tomari neighborhood of Naha, and associated with the neighboring Buddhist temple Seigen-ji. It is counted as one of the eight shrines of Ryûkyû (琉球八社, Ryûkyû hassha).

The shrine is said to have been established sometime around 1465 to 1487, and is dedicated to Izanami-no-mikoto, along with two other deities. It was moved to its current location in 1734.[1]