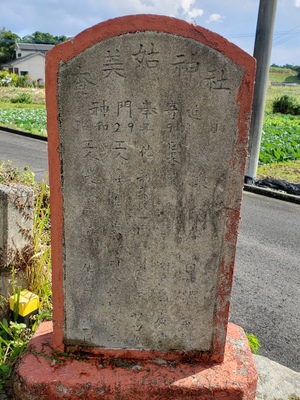 A stone marker at the entrance to Amamikyo Shrine on Amami Ôshima, with the deity's name given as「奄美姑」.

Amamikyo is the primary primordial creation goddess in Ryukyuan origin myths. Along with her male counterpart Shinerikyo, Amamikyo is credited with creating the Ryukyu Islands themselves, as well as numerous gusuku and utaki (sacred sites),[1] and with introducing rice cultivation and other technologies.

While some myths assert that she first came down to earth at Kudaka Island and then crossed over to Okinawa Island at Sefa utaki - hence these two sites being the most sacred sites on/near Okinawa - others relate the story of the creation of the world, then the islands, then the utaki and gusuku, in a narrative progression moving from north to south. Legends in northern Okinawa assert that Asumui utaki, a sacred grove at the northern tip of Okinawa, Hedo no misaki, was the first such sacred grove she created.[2] Scholars such as Gregory Smits have tied this legendary southward progression to actual historical migration of peoples southward from the more northerly islands into Okinawa, bringing with them cultural customs as well as technologies such as iron working and rice agriculture.[3] Some have gone so far as to suggest that the name of the deity itself may derive from, or literally mean, "a person" or "people" from "Amami".[4]

A site on Hamahiga Island (a tiny island just off the coast of the Katsuren peninsula of the Okinawa Island "mainland") is traditionally identified as the grave of Amamikyo.[5]