From SamuraiWiki
(Redirected from Zusho Hirosato)
Jump to navigationJump to search 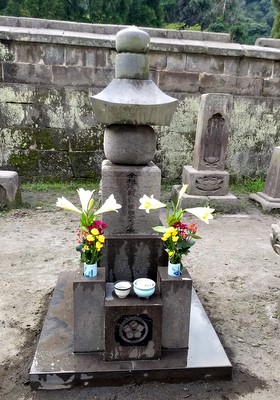 Grave of Zusho Shôzaemon at the Shimazu clan cemetery on the former site of the Buddhist temple Fukushô-ji, Kagoshima

Zusho Shôzaemon was an official in the service of Satsuma han, known as a prominent member of the so-called "conservative" faction within domain politics, supporting daimyô Shimazu Narioki in contrast to the "radical" faction of Narioki's son, Shimazu Nariakira, in the 1840s.[1]

Born the second son of Satsuma retainer Kawasaki Motoaki (川崎基明), he was adopted by tea-master Zusho Kiyoetsu (調所清悦), and in 1798 became attached to the retired lord of Satsuma, Shimazu Shigehide, taking on the name Shôetsu. In 1811, he was named tea master (茶道頭), and in 1813, konando (a personal aide direct to the lord). He then changed his name to Shôzaemon Hirosato. In 1814, he was named soba-goyônin and was simultaneously appointed to a position dealing with the finances of the domain. In 1818, he was appointed to be in charge of financial reform efforts, and traveled to Osaka to look into the condition of the domain’s finances. He negotiated new financing plans with the Izumo-ya and Hirano-ya, and the following year (1819), with the help of economist Satô Nobuhiro (佐藤信淵)、he began a domain industry in indigo.

At some point in his career, he also served as Ryûkyû-kikiyaku, overseeing the operations of the Ryûkyû-kan for the domain government.[2] He held that position until his death.[3]

Zusho is also known for his agricultural and commercial policies which aimed in the 1820s-1830s to alleviate the domain's deep financial difficulties. These policies aided the domain somewhat, but at the cost of the further exploitation of the people of the Amami Islands.

By 1827, Satsuma was the poorest domain in the realm in terms of the size of its debts, owing some 320,000 kan in loans taken out from Osaka merchants, in large part in order to help finance sankin kôtai missions to Edo. Zusho was placed in charge of suggesting and implementing policies which might help improve the domain's revenues, and thus help pay down the debts. He did this in part by establishing official monopolies on rapeseed, sugar, and rice within the domain, and by imposing requirements for the quality of these products. He also oversaw the expansion of trade in sulfur and a number of other products. As the quality of exported rice, rapeseed, and other products improved, so too did the reputation and thus the price of those products. Zusho also expanded efforts aimed at combating smuggling and, ironically perhaps, enlisted sailors such as the Hamazaki family to operate as Satsuma-sanctioned smugglers, grabbing a share of the trade from the Western and Eastern Sea Circuit shipping routes, and paying some portion of it to Shimazu clan coffers. Further, Zusho also oversaw the repair or construction of roads, riverworks, bridges, harbors, and the like within the domain, as well as efforts to bring new land under cultivation.

However, Zusho had a particularly significant impact upon the production of sugar in the Amami Islands, where "a structure of colonial extraction,"[4] as one scholar described it, was already in place from nearly the beginning of the 17th century. Zusho re-established a monopoly the domain administration had previously exercised over the sugar produced there, claiming it all from the islanders for roughly 1/3 the price it would earn on the Osaka market. He also expanded the plantation-like exploitation of the island by mandating that all rice paddies on the islands be drained and replaced with fields of sugar cane. Men between the ages of 15 to 60, and women from the age of 13 to 50, were assigned fields to work, and were obliged to purchase all of their food and other necessities from Satsuma officials, often at raised prices; the islanders were further forbidden from using money on the island, and from trading amongst themselves.

He was named karô in 1832 and that same year accompanied a Ryukyuan embassy to Edo.[5]

As Western ships began to call at Ryukyuan ports more frequently in the 1840s, presenting a problem for the enforcement of restrictions on foreign trade & interactions, Zusho advised following the advice of Godai Hidetaka, a Confucian scholar in service to the domain, who in an 1843 memorial to the daimyô, suggested that Ryûkyû, even with Satsuma's help, could not hope to resist Western ships militarily, and thus had no choice but to engage with the situation diplomatically. He suggested that Ryûkyû tell foreigners seeking to trade that Ryûkyû is a small and poor kingdom, and that its tributary relationship with China did not allow it to enter into separate or additional arrangements; further, if that did not suffice, Godai advised that the Ryukyuans tell the foreigners that if they wanted to trade at Ryûkyû they would need to negotiate with Beijing, or with the shogunate. If all else failed, Godai advised that Satsuma would have to concede to open some Ryukyuan ports to trade, in order to help guard against having to open any ports in Satsuma. In accordance with these recommendations, daimyô Shimazu Narioki ordered 150 men to travel to Ryûkyû in 1844 to aid in the defense of the kingdom. Their departure from Satsuma was delayed, however, and once they arrived in Ryûkyû they remained for only six months; this because the Shimazu knew that if it came to actually fighting the French, the samurai would undoubtedly lose no matter how many men there were, so he sought to make a gesture but not actually risk too many warriors.

Zusho met with rôjû Abe Masahiro in 1846, in his capacity as an official representative of Satsuma, after the Sabine and two other French warships imposed themselves upon Ryûkyû for several months. He found Abe supportive of the ideas that any Western trade with Ryûkyû should be done at Fuzhou, and not at Ryûkyû, and that telling the French they would have to negotiate with Beijing first would be a useful delaying tactic. Zusho also assured Abe that Satsuma was adequately defending Ryûkyû with hundreds of troops, which was not in fact the case.

Later that year (in 1846/10), he conveyed to Ryûkyû that Satsuma would be providing the kingdom with 10-20,000 ryô to help finance the establishment of institutions for trade with France. Satsuma officials hoped they might be able to get the French to trade Chinese goods to Ryûkyû, thus further expanding the China trade; the Ryukyuan government rejected this idea, expressing a desire for a greater focus on Ryukyuan goods, and a concern about any scheme that would encourage foreigners to come to Ryûkyû.

Tensions between the two factions within the domain heated up around this time, as Abe Masahiro placed the daimyô's son, Nariakira, in charge of the defense of Ryûkyû. For a brief time, Nariakira and Zusho worked independently from one another, pursuing their various schemes, sometimes working at cross-purposes and sometimes supporting one another without knowing it, as neither discussed their schemes with the other. As Nariakira and his father traveled back and forth between Edo and Kagoshima, their power within the domain ebbed and waned. Eventually, however, Nariakira gained the upper hand; in the eighth month of 1848, he shared with shogunate officials a plan proposed by Zusho in 1846 to expand Ryûkyû's trade at Fuzhou, and to use Satsuma funds to do it. The shogunate was particularly wary at this time of Satsuma trying to compete against the shogunate's own commercial activities at Nagasaki, and this plan had never been shared with, let alone approved by, the top shogunate officials. Abe confronted Zusho about the plan a few months later, in 1848/12, and Zusho, fearing that this would bring an official punishment to his lord, claimed all responsibility himself, by committing suicide at the domain's Edo mansion.[6] Karô Shimazu Hisataka was named Ryûkyû-kakari in his place, and sobayaku Nikaidô Shizuma was assigned responsibility for the matters under Shôzaemon's purview.[3]