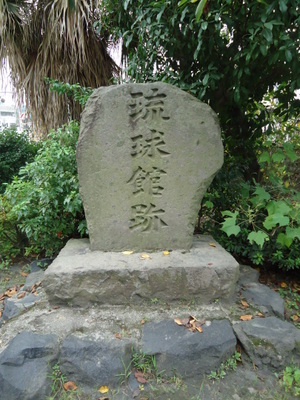 Stone monument on the former site of the Ryûkyû-kan in Kagoshima, today the grounds of the Nagata Middle School

The Ryûkyû-kan or Ryûkyû-yakata were a pair of institutions, one located in early modern Fuzhou and one in Kagoshima, which served as pseudo-embassies, or branch offices of the government of the Ryukyu Kingdom, providing bases of operations for official Sino-Ryûkyû and Satsuma-Ryûkyû business, as well as lodging for Ryukyuan students and officials.

The Ryûkyû-kan in Kagoshima was located below the castle, directly between the family mansions of the Tanegashima clan to the north, the Hongô (Miyakonojô Shimazu) clan to the south, and the Miyanojô and Tarumizu Shimazu clans to the west, past the Shinbashi ("New Bridge") over the outer moats of Kagoshima castle.[1] The compound covered an area of roughly 3599 tsubo, and appears in the Satsuma fudoki.[2] The structure was originally constructed as a residence for elite hostages, members of the Ryukyuan royal family who would be kept in Kagoshima to help ensure the loyalty and cooperation of the Ryukyuan government. However, this quickly shifted into a different sort of relationship, and the building, originally known as the Ryûkyû-kariya (琉球仮屋, Ryûkyû temporary residence), became a sort of branch office for Ryukyuan official interactions with Satsuma han domainal authorities. The term kariya was widely used in Kagoshima domain to designate regional branch offices for domainal administration; this Ryûkyû kariya was thus but one (albeit a special one) within a network of standard domainal practices.[3] The Ryûkyû kariya was renamed Ryûkyû kan or Ryûkyû yakata, meaning roughly "Ryûkyû Hall," in 1783.[4] The site is occupied today by Nagata Middle School.

The Ryûkyû-kan played a central role in relations between the Kingdom of Ryûkyû and the han to which it was a vassal, serving a function not unlike a modern-day embassy. Visiting dignitaries lived and worked in the Ryûkyû-kan for various lengths of time, as did students studying classic subjects in preparation for careers in the kingdom's bureaucracy, and a number of Ryukyuan permanent residents of the city. The chief Ryukyuan official permanently resident at the Ryûkyû-kan, typically of ueekata (J: oyakata) rank, was known as the zaiban oyakata ("resident elder"); he and a samurai official known as the Ryûkyû-kikiyaku (lit. "listener"), were collectively known as the Ryûkyû-gakari, and were charged with overseeing the residents and operations of the Ryûkyû-kan, as well as performing various administrative duties related to communicating Satsuma han missives and edicts to Ryûkyû.

Ten or so[5] Ryukyuan students and officials were resident at the Ryûkyû-kan on a semi-permanent basis. In addition, a delegation of roughly twenty officials visited the city each year to offer formal New Year's greetings to the Satsuma daimyô, on behalf of the King of Ryûkyû. As with the sankin kôtai missions performed by the daimyô, to pay respects to the shogun in Edo, here too there was a connotation of this delegation, as well as the permanently resident officials, serving as political hostages. Additional missions were sent from Ryûkyû on occasions such as congratulating the daimyô on receiving certain titles and honors, or on becoming daimyô, as well as for expressing gratitude for the daimyô's recognition of a new king on the Ryukyuan throne, or for other favors granted by the daimyô to the kingdom. It was also customary for Ryukyuan Crown Princes to pay an official visit to Kagoshima upon turning fifteen years old, but the king was not typically obligated to journey to Kagoshima himself.

At least during New Year's, Ryukyuan visitors to the city are said to have been permitted to wander quite freely in the castle town, and to enjoy the sights.[4] However, at other times or in other respects, Satsuma's control over the Ryukyuan officials is said to have been tight; wandering or loitering in the area around the building was forbidden, and guards posted at the entrance checked visitors in and out[6]. As with the Japanese officials resident in Ryûkyû, Ryukyuans resident in Kagoshima could interact with Japanese, travel around the city, and to other parts of the country, only on official business, and under tight supervision and strict regulations. Similarly strict policies applied to Japanese visiting the institution; with the exception of officials on official business, and authorized merchants known as tachi'iri or yôkiki,[7] they were forbidden from entering the building without official permission, as well as from loitering nearby or communicating with Ryukyuan individuals about anything other than official business. Further, all in-person interactions between Ryukyuan and Japanese individuals had to be conducted through an official interpreter - this despite the fact that many, if not most, Ryukyuan scholar-bureaucrats were competent in the Japanese language.

However, this is not to say that social calls and cultural interactions between Ryukyuans and Japanese did not occur; they simply had to be requested and approved in writing ahead of time. Writings by traveling scholars such as Tachibana Nankei who visited Satsuma in the early 1780s relate meetings with Ryukyuan students in which they drank together, exchanged poetry, and shared songs. For those few Japanese from other provinces who were able to visit Kagoshima (given the tight border controls enforced by most Satsuma daimyô, with the notable exception of daimyô Shimazu Shigehide, r. 1755-1787), there was also the potential for the opportunity to witness Ryukyuan processions or the like in the city, outside of the Ryûkyû-kan.

The other Ryûkyû-kan (Liuqiu guan in Chinese pinyin), was located in the Chinese city of Fuzhou. Built around 1430-1440, and originally known as the róuyuǎn yì (J: jûen-eki),[9] this was one of a number of stations established by the Chinese to cater to foreign visitors. Fuzhou became the official site for Ryukyuan business in China in 1470, and for a Maritime Trade Office, or shìbósī previously located in Quanzhou. The administration of the róuyuǎn yì in Fuzhou, now known as the Ryûkyû-kan, which had previously been operated by Chinese officials, was now placed under Ryukyuan control. The hall now took on a more official status as the chief Ryukyuan headquarters in southern China, as the láiyuǎn yì (来遠駅, lit. "station for [those who] come from faraway"), a similar institution in Quanzhou, declined. Custom dictated that establishments for foreigners, such as this one, be placed outside the city gates, so as to prevent visiting foreigners from spying on formal goings-on within the city; to that end, the Ryûkyû-kan was built just beyond the city gates (specifically, the Shuǐbù-mén). A bridge called Wànshòu-qiáo (萬寿橋) stood nearby.

At roughly 5600 m2, the Fuzhou Ryûkyû-kan was smaller than its Kagoshima counterpart, though accounts from the time describe it as having especially fine construction and decoration.[10] Its dormitories were one of three places in the city, along with the nearby Kaido-kan and Kokushi-kan[11], which housed visiting dignitaries, scholars and students, most of whom were stopping in Fuzhou on their way between Beijing and Okinawa. The costs of hosting these visitors were mostly borne by the Chinese side. The Ryûkyû-kan also contained storage areas, where goods being gathered or prepared to be given as tribute were held, alongside offices for liaising with the Fuzhou shiboshi Maritime Trade Office. A series of shrines on the grounds were dedicated to Tenpi (Mazu) and local deities, and a mortuary chapel was erected in the memory of Ryukyuans who died in China. One civil official and one martial official, each with five or six subordinates, were assigned to the Ryûkyû-kan. They maintained an office/guardhouse located between the Great Gate and the secondary gate of the compound.[10]

Ryukyuan officials sojourning at the Ryûkyû-kan were permitted to go out and walk around Fuzhou to a certain extent during daylight, but were forbidden from going out at night even on official business.[10]

The structure was renovated seven times during the Qing Dynasty (1644-1911). In the 1870s, a small number of fleeing officials temporarily made the Ryûkyû-kan their base of operations as they tried to convince China to take action to oppose Japan's overthrow and annexation of the Ryûkyû Kingdom. They were ultimately unsuccessful, and the kingdom's territory was annexed by the Meiji state as Okinawa Prefecture. For a brief period in the early decades of the 20th century, a group of Okinawans operated a tea business out of the Ryûkyû-kan.

Today, the Qing period building has been completely lost. A new structure was built in 1992, in a local Fuzhou residential style, with high walls to protect against fire and crime. The grounds contain a small museum, and gravestones for Ryukyuans who died in China during the Qing Dynasty are on display. Though the Ryûkyû-kan was originally built on the banks of a tributary of the Min River, today the river has gone mostly underground, so the reconstruction has moved slightly, facing the Wanshou Bridge (J: Manju-bashi).