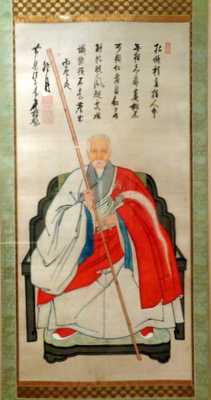 A 1676 portrait of Yinyuan Longqi, on display at the Metropolitan Museum

Yǐnyuán Lóngqí, known as Ingen Ryûki in Japanese, was a Ch'an (Zen) Buddhist master from China who is credited with introducing the Ôbaku sect of Zen to Japan.

The head of the temple of Wanfu-si (J: Manpuku-ji) on Mt. Huangbo (J: Ôbaku) in Fujian province, Ingen was invited by Japanese Zen monks to travel to Japan to help restore or revive the sect of Rinzai Zen in Japan, which had declined, but he did not initially take the monks up on this invitation. He did come to Japan some time later, in 1654, after being invited by the Kôfukuji or Nanjing temple in Nagasaki (of which the head priests and most if not all worshippers were Chinese). He and his disciples introduced a new revised ordination ceremony, and taught a more literal interpretation of Buddhist scriptures.

Ingen soon attracted the attention of Ryôkei, abbot of Myôshin-ji, a Rinzai temple in Kyoto, and was invited to the capital, where he enjoyed an audience with Emperor Go-Mizunoo.

He later also gained the support of Shogun Tokugawa Ietsuna, and was granted permission to establish the temple of Manpuku-ji in Uji, on land given him for that purpose by the Konoe family. The temple, begun in 1661 and completed in 1669, was designed and built in large part by Chinese workers. It is famous for its exceptionally purely Chinese style, and is perhaps the best example of Ming Dynasty architecture surviving today in Japan. It became the head temple of Rinzai Zen in Japan, and as of 1974 had 478 branch temples, 458 priests, and over 244,500 parishioners. Though Zen had been in Japan for many centuries at this point, it was always regarded as the most Chinese, or as the least assimilated, form of Buddhism, and the construction of Manpuku-ji reinvigorated a sense of the Chineseness (and/or foreignness more generally) of Zen in Japan. Up until 1740, the temple's abbots were all priests from the Fujian temple, and after that, Chinese priests alternated with Japanese ones through the end of the 18th century. Rituals continue to be performed, and sutras recited, in a Chinese-influenced or Chinese-inflected manner at Manpuku-ji even today, having some considerable influence upon Zen practice elsewhere throughout the archipelago.