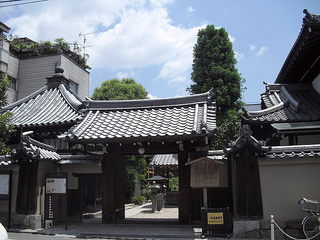 Unrin-in is a Buddhist temple in the Murasakino area of northern Kyoto, on the former site of an imperial villa known as the Murasakino-in.

In the mid-Heian period (c. 9th-10th centuries), this area was far less settled; it was essentially wilderness, and there were often Imperial hunting expeditions and the like conducted here. (The placename Murasakino (紫野, lit. "purple fields") perhaps helping to imply this wild condition.) Emperor Junna (r. 823-833) built a villa on the site called Murasakino-in, which became a famous spot for cherry blossom viewing, or appreciating the autumn leaves, and for literati-style gatherings which included banquets, dancing, and poetry exchange.

Prince Tsuneyasu, a son of Emperor Ninmyô, later inherited the villa, and in 869 had it converted into a temple by the monk Sôjô Henjô. Unrin-in remained famous for a time, and the placename appears in such works as the Genji monogatari, Ise monogatari, and Kokinshû.

In the Kamakura period, the temple was absorbed by Daitoku-ji.

The current main structure, a Kannon-dô last rebuilt in 1707, holds a statue of the 11-faced Kannon, and one of Daitô Kokushi, founder of Daitoku-ji. The temple's main hall (hondô) was moved to the Daitoku-ji sub-temple Kohôan when the latter was founded in the early 17th century.