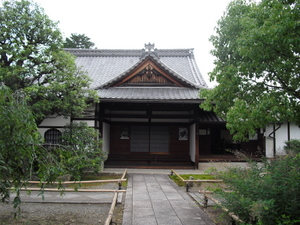 The entrance to the main hall.

Originally established within the grounds of Ryûkô-in, it was later moved to its current location, a few blocks west of the core of Daitokuji, and received its main hall (hondô) from the temple of Unrin-in. The characters used to write the temple's name, Kohôan, roughly translate as "solitary reed mat hermitage," but the reed mat refers to those which would have been placed on the deck of a ship; the name is supposed to recall the idea of a solitary boat on the ocean. The temple is known for its tearoom, known as Bôsen, and tea garden, which are likewise designed to evoke the idea of looking out over the ocean from the deck of a small ship. The Bôsen tearoom and shoin (study) in the main hall are nationally designated Important Cultural Properties.

Fusuma paintings in the main hall include a pine, bamboo, and plum set by Kanô Tanshin, eldest son of Kanô Tan'yû.

The temple burned down in 1793, but was rebuilt by Matsudaira Fumai.