Soga Monogatari, or "The Tale of the Soga Brothers," is the story of the Soga brothers, Soga Gorô and Soga Jûrô, who seek their father's murderer in order to kill the murderer and avenge their father. The story has been told and retold with much variation and elaboration, in a variety of forms, including medieval storytelling performance, kôwaka mai, illustrated books, Noh, kabuki, and bunraku puppet theatre, but is based originally on a true historical incident, in which two brothers by the name of Soga, on 1193/5/28, killed Kudô Suketsune, who had killed their father in 1176. Jûrô, however, was killed in the fighting; Gorô died later that same year.[1]

Kudô had been a retainer to the Shogun, Minamoto no Yoritomo, making Yoritomo a possible target for revenge as well. Though initially concerned about this possibility, Yoritomo is said to have commented on the brothers' bravery, and to have been so moved as to desire to pardon Soga Gorô, the surviving brother. Suketsune's son, Inubômaru, protested however, and in the end, Soga Gorô was formally executed. 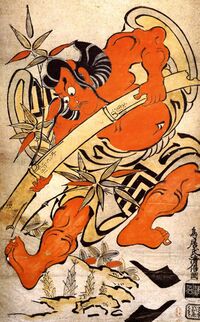 The Soga Brothers story was first related in the Azuma kagami, first compiled after 1266; texts known by the name "Soga Monogatari" came sometime afterwards, along with kôwaka mai (medieval ballad-dramas), and later Noh plays, and, in the 17th century, kabuki plays. In many of these texts, the brothers seek their father's sword Tomokirimaru, which had been stolen by his killer.[2]

The Soga story came to be incorporated into a number of kabuki plays with their own separate and distinct characters and plots, but in which characters are then revealed to be Soga Gorô and Jûrô, hunting for their father's killer. One of the most famous and most popular of these plays, known as Soga-mono, is Sukeroku. Despite being set in contemporary 18th century Edo, and more specifically in the Yoshiwara pleasure district, where ruffian Sukeroku seeks the love of the courtesan Agemaki, and seeks his father's killer, Sukeroku is later revealed to have been Soga Gorô all along.