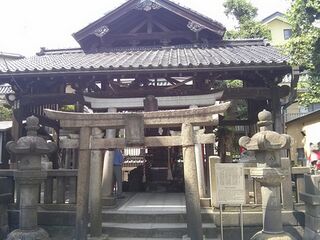 Shinmon Tatsugorô was a head of the tenth division of one of the Edo fire brigades. He is known for the Hikan Inari Shrine he established at Sensô-ji in 1855, after his wife prayed at Fushimi Inari Shrine for recovery from a serious illness, and enjoyed a full recovery. The 1855 structure survives today.

Tatsugorô was a retainer under Rinnôji-no-miya, abbot of Kan'ei-ji, and an adopted son of Machida Niemon. When Prince Rinnôji-no-miya Shunnin took up residence at Sensô-ji in his retirement, Tatsugorô was assigned to oversee the construction and guarding of a new gate for the prince's travels between Asakusa and Ueno. Though originally bearing the surname Machida, Tatsugorô then came to be known as Shinmon (lit. "new gate").