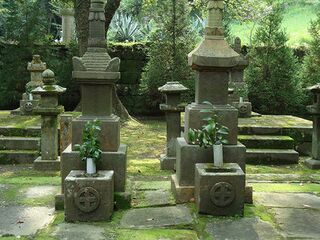 Shimazu Tadamasa was the 11th head of the Shimazu clan. He is known both for his political/military exploits, and for the founding of the Satsunan school of Neo-Confucianism, which got its start when Tadamasa invited Keian Genju to come to Satsuma to lecture on the subject in 1478.

A son of Shimazu Tatsuhisa, Tadamasa's notable campaigns include the defeat of the Itô clan in 1485 in southern Hyûga. He suffered the rebellion of a number of his vassals in Ôsumi in 1496, and of the Kimotsuki clan in 1506. He is said to have killed himself, in 1508, the result of a combination of illness, and for his failure to suppress the Kimotsuki rebellion.

He was succeeded as clan head, in turn, by each of three of his sons, Shimazu Tadaharu, Tadataka, and Katsuhisa.