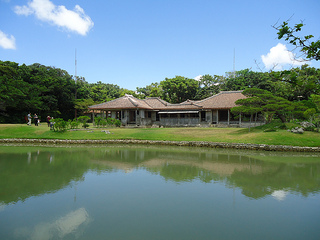 The royal residence at Shikinaen

Shikinaen ("Shikina Gardens") is a historic site in Naha, Okinawa, a former Ryukyuan royal villa. On account of its location a short distance south of the main royal palace at Shuri, Shikinaen is also known as Nan'en ("Southern Gardens").

The complex is said to have been built to host welcoming receptions for Chinese investiture envoys. The garden, complete with a red-tile-roofed palace hall, a pond with a small island in it, and a Chinese-style stone bridge, received enthusiastic praise from Chinese visitors.

The garden has two gates - a main gate (正門, seimon) used exclusively by Chinese envoys and members of the royal family, and a smaller side gate (通用門, tsûyômon) used chiefly by the staff. Both are constructed in the yaajô (屋門) style, with red ceramic tile roofs; construction in this style was restricted to the upper classes.

A narrow path in the shape of an S-curve leads into the gardens, from the main gate to the main villa. This road, separating the villa from the outside, and leading to it only indirectly, served a similar function to the hinpun in typical Okinawan homes, blocking evil spirits or bad fortune from entering the home. A small guardhouse sits within the compound, just north of the side gate.

Shikinaen was supplied with fresh water by a spring called Ikutokusen (育徳泉), surrounded by walls of Ryukyuan limestone in the aikata-zumi style. Prior to WWII, the spring was sheltered by a cypress-shingled roof, but this roofed structure has not been reconstructed. A pair of stone stele were erected next to the shrine by the chief envoys of two Chinese investiture missions - Zhao Wenkai in 1800, and Lin Hongnian in 1838 - reading, respectively, Itokusen and kanrei enrei (甘醴延齢, sweet saké, long life). These were severely damaged in World War II, but have been restored.

Two stone bridges passing over the pond were constructed in a southern Chinese style, using techniques also from southern China, to create tall, high arches, allowing boats to pass underneath more easily. The stones used in these bridges, pieces of Ryukyuan limestone from the wave-battered seashore, were chosen for their resemblance to the rocks of Lake Tai, treasured for their twisted and pockmarked appearance and displayed as scholars' rocks.

A small viewing pavilion, after the fashion of Chinese gardens, is also located on the pond. Originally, this was a four-sided pavilion with an irimoya-style roof, but in the 1920s it was replaced with the rokkakudô (lit. "six corner hall"), a small six-sided pavilion with a tiled roof with swooping eaves, in the Chinese style. Previously, an eight-sided pavilion called the hakkaku-dô stood on the other side of the pond, near a takiguchi (lit. "waterfall mouth") which funneled any overflow water from the pond into a controlled waterfall. A funa-ageba off to one corner of the pond stored pleasure boats which the royalty and their guests enjoyed riding on the pond.

An observatory pavilion called Kankôdai also stands on the grounds; the name derives from the inscription on a stele nearby, erected in honor of Lin Hongnian, chief envoy of the 1838 Chinese investiture mission. The pavilion and stele were destroyed in 1945 but have been reconstructed. The view here faces south, and is a rare viewpoint in Okinawa at which the sea cannot be seen; the Ryukyuan kings were proud of this vista, as an opportunity to show Chinese envoys that Ryûkyû was not a small country.

The main palace/residence, or udun, at Shikinaen was expanded in the Meiji and Taishô periods, and covers an area of roughly 160 tsubo, or 525 m2. It was constructed largely in a formal style exclusive to the royalty & aristocracy, of plain wood and red tiled roofs, though some sections employ less exclusive architectural styles. The fifteen rooms include three reception rooms (called, simply ichiban-za, niban-za, and sanban-za), alongside kitchens, a tea room, and ... . The villa also included a number of other general-use rooms, known as the ouraza (rear room), mae no ichibanza and mae no nibanza (first and second front rooms).

The first, second, and third reception rooms, which could be joined to create a single large space (just as in many forms of traditional Japanese architecture, the sliding doors separating rooms could be opened, or removed), were used to entertain elite guests, including, especially, Chinese investiture envoys. The front rooms were also occasionally used for this purpose. The spaces were furnished with lacquerware furniture, including chests of drawers and garment stands, and wooden plaques, gifts from Chinese envoys and bearing the envoys' calligraphy, were hung on the walls.

A small stone basin sat in one of the corridors, being used to heat up tea, liquor, and food, or to keep it warm, in a location much closer to the reception rooms than the kitchen was.

Just outside of the first reception room (ichibanza) stood a number of pine trees, along with a stone wash basin, stone lantern, and white plum trees which would have bloomed beautifully right around the first month of the year (on the traditional lunar calendar).

As in most traditional Japanese structures, the kitchen, called gudeeju in Okinawan, was located in an area called the doma, with earthen floors and no ceiling; smoke from the kitchen's six fireplaces (takiguchi, "cooking mouth") rose directly into the thatch of the roof, helping protect the thatch from insects and from fire.

A carriage house, or kagoya, is located just behind the villa. This was used to store palanquins (御輿, O: ukushi), and as a place where palanquin carriers would rest.

The garden & villa were destroyed in the Battle of Okinawa in 1945, and some dugouts created by soldiers during the Battle can still be seen in the grounds. Shrapnel, possibly from an American shell, was also discovered on the site. Reconstruction of the garden and buildings was completed in 1995, and the site is now administered by the City of Naha. It is a nationally-designated "site of scenic beauty," and was designated a World Heritage Site in 2000 alongside a number of other sites, comprising the collective World Heritage Site "Gusuku Sites and Related Properties of the Kingdom of Ryukyu."

The gardens originally occupied nearly the entire village of Shikina, but the yaadui phenomenon of the 1700s marked the beginning of the expansion of the area outside of the garden as a residential area, as scholar-aristocrats in financial difficulties began moving from Shuri in search of more affordable places to live. The residential district thus created came to be called Maji. Residents formed a kyôdôtai (local administrative collective) in the early Meiji period, and in 1909 part of this neighborhood was split off as the new district "Hantagawa." Maji was formally made an official district in 1916.

The area features a number of significant natural springs, including the Itokusen, as well as many graves. The latter were formally grouped into the Shikina Cemetery (Shikina reien) in 1956; the graves of a number of notable historical figures, including Tei Junsoku and Nomura Anchô, were among those incorporated into the cemetery.

Shikina Shrine and its associated temple, Jin'ô-ji, as well as an equestrian grounds known as Shikina baba, were also located in the area. Of these, only the shrine remains today.