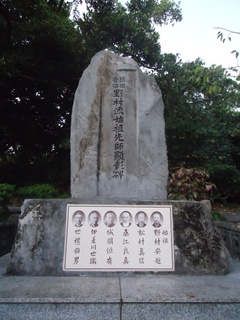 Nomura Anchô was the founder of the Nomura-ryû school or style of classical Okinawan uta-sanshin music, the largest such school active today.

Nomura's teacher, Chinen Sekkô (1761-1828), was taught in turn by Yakabi Chôki (1716-1775), who is credited with developing the kunkunshi notation system, and whose Tô-ryû style of uta-sanshin served as the basis for both Nomura's and the other schools of classical music prominent today.

Anchô served three kings of the Ryûkyû Kingdom - Shô Kô, Shô Iku, and Shô Tai - as a court musician. At the orders of Shô Tai, he presented the king in 1869 with a compilation of kunkunshi notation for over two hundred musical pieces. This compilation continues to serve as the basis of the Nomura repertoire today, along with an appendix volume created in the Meiji period, and a system of notation for the vocals, developed by Serei Kunio in the 1930s.