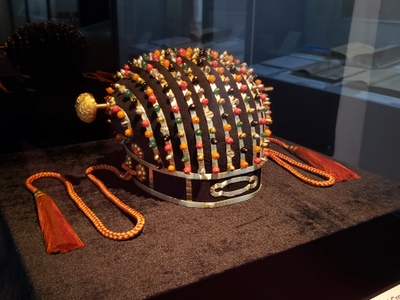 A replica of the Naha City Museum of History crown, on display at Shuri castle

The kings of the Ryûkyû Kingdom received formal investiture from envoys sent by the Chinese Court; the investiture ceremonies involved the use of special ritual garments called hibenfuku, including a Chinese-style crown called alternatively hibenkan, or tamanchaabui.

Such crowns were first bestowed upon the kings of Ryûkyû beginning in 1427, with the investiture of King Shô Hashi. These crowns were originally produced in China, along with Ming-style royal robes (hibenfuku), both of which were then granted to the kingdom on special occasions. Originally, the Ming court reserved crowns with twelve strips of jewels for the emperor, and those with nine to crown princes, granting crowns with seven strips to kings of tributary kingdoms.[1] However, with the fall of the Ming and the change to the Qing Dynasty in the mid-17th century, Ryûkyû began producing its own investiture crowns and Ming-style robes. Such robes gradually grew more elaborate over time, and the crown too was made more elaborate; in 1754, the kingdom changed its crowns from nine gold-embroidered & bejeweled bands to twelve.[2]

One such crown, dating to the 18th or 19th century and believed to be the only example extant, is today in the collection of the Naha City Museum of History, and has been designated a National Treasure. The crown is only on display twice a year, for limited periods, for conservation reasons. It is a black woven hat with twelve thin strips of gold running in parallel vertically along the front of the crown; each strip is further decorated with 24 jewels or small orbs of gold, silver, jasper, quartz, coral, or the like, for a total of 288. A large golden hairpin (kanzashi) with a dragon design on the head of the pin was also worn with the crown.

This crown is one which had been brought by the royal family to Tokyo when the kingdom was abolished in 1879; another crown, which had remained in Okinawa, is believed to have been stolen or destroyed in 1945. Kept in the Nakagusuku Palace[3] from the 1870s until that time, along with a collection of other royal treasures and records not taken to Tokyo, it was hidden during the Battle of Okinawa, along with a number of other precious royal treasures in a drainage ditch near the palace. Of the eight royal stewards charged with caring for these objects, only the most senior stewards were permitted to touch the crown. Maehira Bokei, a junior steward around 20 years old at the time, was the only one of the eight still alive as of 1997. When he and the other seven royal stewards returned after the battle ended to recover the objects, however, they found that all the objects were missing. A precious copy of the Omoro sôshi, which had been among the items hidden in that same ditch, later surfaced in Boston; it was among a number of objects which had been taken by intelligence officer Comdr. Carl W. Sternfelt, who relinquished them to agents of the US government in 1953, who in turn promptly returned them to Okinawa that same year, in conjunction with events celebrating the 100th anniversary of the coming of Commodore Perry to Japan. Kishaba Shizuo of the Ryukyu America Historical Society, however, spent much of the remainder of the 20th century convinced that Sternfelt had taken the crown as well, and actively seeking to find and recover it; Sternfelt's family insists they have never seen it, and it remains unknown today if this second crown still survives.