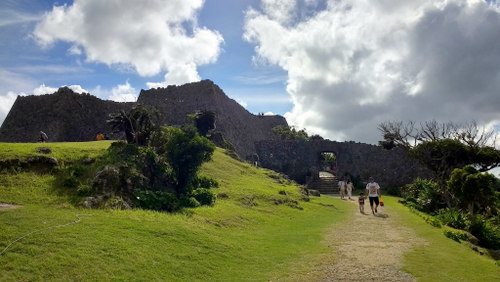 The walls of Nakagusuku's third enclosure (san-no-kaku), and the rear gate (uramon) visible on the right

Nakagusuku was an Okinawan gusuku fortress, on the east coast of central Okinawa Island. Built in the 14th century, the castle fell in 1458 when its lord, Gosamaru, was defeated by forces of the Ryûkyû Kingdom; the ruins have today been designated a UNESCO World Heritage Site, as part of the broader umbrella grouping "Gusuku Sites and Related Properties of the Kingdom of Ryukyu." Nakagusuku is generally regarded as the most well-intact gusuku site on Okinawa.

Originally built in the 14th century, Nakagusuku gusuku was ruled for a number of generations by the successive Sachinakagusuku anji. In 1440, the lord of Zakimi gusuku, Gosamaru, was moved to Nakagusuku and became the lord of the castle. As lord, Gosamaru oversaw the expansion of the northern and third enclosures.

The castle is most famous for the circumstances surrounding its fall. The fourth lord of Nakagusuku, Gosamaru, was assigned there by the royal court at Shuri in order to keep an eye on Amawari, lord of Katsuren gusuku, who the court suspected of plotting against the king.[1] There, Gosamaru oversaw a renovation or expansion of the castle; though many accounts indicate that Nakagusuku was built at this time, Gosamaru was the fourth lord of the castle, so clearly it must have been built earlier.

Amawari flipped the tables on Gosamaru, however, by reporting to the court that it was Gosamaru who was plotting against the throne,[1] and before long, royal armies, aided by Amawari's own forces, had taken the castle. Gosamaru committed suicide. According to some accounts, he nobly refused to fight back, in order to show his loyalty to the kingdom.[2] However, as both Nakagusuku and Katsuren locals maintain today lionizing legends about their local heroes, it is difficult to separate fact from fiction regarding the identity of either Gosamaru or Amawari as being truly as noble, or as evil, as the other town's legends would have it.

However, Amawari's wife, Momoto Fumiagari (according to some accounts, a granddaughter of Gosamaru), then reported to the court that the entire thing had been a plot by Amawari to eliminate his rival (Gosamaru) and to seize power for himself. As a result, that same year, Katsuren was also attacked and taken by royal forces, and Amawari killed. Today, some accounts suggest that the entire affair was actually a scheme by the royal government to eliminate both lords, thus consolidating power for the throne.[3]

At some point, the magiri (district) of Nakagusuku became the traditional seat of the Crown Prince. As a result, the Crown Prince's residence in Shuri was named Nakagusuku udun ("the Nakagusuku Palace"); it is not to be confused with the castle. From at least the early 17th century onward, if not earlier, Nakagusuku gusuku came to house administrative offices and guardhouses for the kingdom, continuing to function as a local administrative center for the surrounding area. Commodore Perry and his party visited Nakagusuku while in Okinawa in 1853, and his illustrator produced drawings of the castle which were included in the party's official report.

Following the abolition of the kingdom in the 1870s, the gusuku became the site of the local village office. The buildings on the site largely survived until they were burned down in the 1945 Battle of Okinawa. An amusement park was then built on the site, before being later dismantled.[4] Along with the other gusuku sites designated as World Heritage Sites, Nakagusuku is today operated primarily as a historical site and tourist site, with a minimum of modern structures on-site.

The castle is located atop a 160m high hill, roughly two kilometers from Yagi Harbor. From the highest point in the site, Nakagusuku Bay (and the Pacific Ocean) is visible to the east, and the East China Sea to the west; the Katsuren and Chinen peninsulas are also visible. The stone walls are made primarily of cut Ryukyuan limestone. Sadly, little survives of any historical documentation which might have existed describing in greater detail the size, layout, or style of buildings on the site. However, some general information about the layout can be discerned from what remains, and from archaeological research.

Today, it is the historical rear gate which functions as the main gate into the complex.

The first enclosure (ichi no kaku or ichi no kuruwa) was the largest of the castle's enclosures, and contained the main hall (seiden). After the fall of Nakagusuku, this hall was replaced with an administrative building (bansho) overseeing the surrounding magiri (district); following the abolition of the kingdom, a village office (sonyakuba) was constructed in the space, but was not rebuilt after its destruction in the 1945 Battle of Okinawa. The third enclosure (san no kaku or san no kuruwa), expanded under Gosamaru some time after the initial construction of the castle, is sometimes referred to as the "new castle" (miigusuku). Its walls are built in the aikata style, a newer, more advanced style than the nuno-zumi style in which the walls of the first and second enclosure were built.

Some eight sacred spaces (utaki) once stood within the grounds, including one dedicated to prayers for rain, one facing Kudaka Island, and one facing Shuri.

Just outside of the walls to the west is a cave called kashijaa gama, which is believed to have been used for smithing, though it is unclear whether these smiths were in the service of the castle, or belonged to the neighboring village.