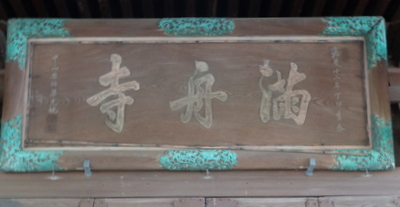 A wooden plaque (hengaku) at the Buddhist temple Manshû-ji, in Mitarai, based on calligraphy by Ryô Kôchi

Ryô Kôchi was a Ryukyuan scholar-official, who served as a musician (gakushi) on the 1806 Ryukyuan mission to Edo.

Kôchi was born the eldest son of the head of the Ryô family of Kumemura. He succeeded his father as jitô of Tôma (an area in Nakagusuku magiri), in 1773, becoming the 13th head of the family. In 1791, he was granted the aristocratic rank/title of satunushi, and a post as an interpreter (tsûji). He then studied in China for three years beginning at age 25, and shortly after his return, in 1795, was first granted the right to wear a yellow court cap. In 1799, Ryô Kôchi was assigned to help oversee the reception for Chinese investiture envoys.

In 1804, at age 36, he was appointed to serve as a gakushi on the upcoming mission to Edo; he then did so, traveling to Edo with the mission in 1806.[1] A piece of his calligraphy, copied onto a wooden plaque (hengaku) by the Japanese haikai poet Kurita Chodô, can be found today in the main hall (hondô) at Manshû-ji in the Inland Sea port town of Mitarai (today, part of Kure City, Hiroshima prefecture); the temple also holds the original calligraphic work, on a scroll, in its storehouses.[2]

After his return from Edo, Ryô Kôchi was appointed in 1807 one of the yokome based in Kumemura. He was elevated to the title of Chûgi-dayû in 1815, and to the Môshikuchi-za (and the rank of peekumi) in 1824. That same year, he was elevated to the rank of Seigi-dayû, and was sent on a mission to China, departing Naha on 1824/9/11 and arriving in Fujian on 9/26. The mission arrived in Beijing three months later, on 12/26. Following his return, Ryô was named Shikin-dayû in 1827 (along with the rank of ueekata, and the right to wear a purple court cap). He was once again named Seigi-dayû in 1831, and was named Kume-sôyaku (the top official overseeing matters in Kumemura).