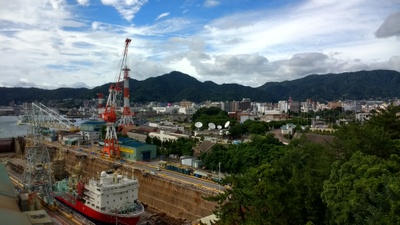 View of the Kure Naval Facilities

Kure is a city in Hiroshima prefecture, known chiefly for its historical role as the site of a major early 20th century naval base. It was at this base that the battleship Yamato, one of the largest and most powerful battleships ever built, was constructed. Today, much of the former naval facilities are used by the Japan Maritime Self-Defense Forces (kaijô jieitai).

Settlements existed in the area since at least the beginning of the 8th century. A no-longer extant local shrine known as Kameyama Shrine is believed to have dated to 703; requisitioned by the military in 1886, it was replaced by military structures.[1]

The region suffered a major earthquake in 1905. The following year, there was a major labor strike at the Kure Naval Arsenal. The naval base was rebuilt in 1907 following the earthquake. Though significantly damaged by air raids in 1945, a number of red-brick and other prewar buildings survive today.

The city around the naval base constitutes the center of Kure City; Kure Station sits near the naval base and the Yamato Museum, and connects the city via the Kure Line with Hiroshima to the west, and various cities such as Takehara to the east.

The administrative boundaries of the city, however, also extend a short ways inland, and include several islands in the Inland Sea as well. These include Kurahashi Island, Shimo- and Kami-kamagari Islands, Teshima, and Ôzaki Shimojima, along with a number of smaller islands. In the Edo period, the ports of Kamagari (on Shimokamagari Island) and Mitarai (on Ôzaki Shimojima) were significant shiomachi ports along Inland Sea travel routes, and regularly saw daimyô and other elite travelers, as well as Korean and Ryukyuan embassies to Edo.