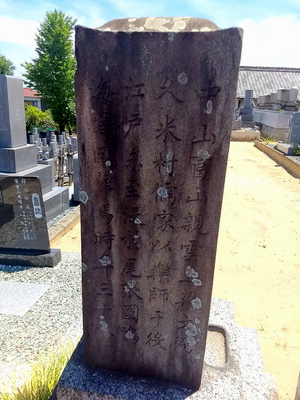 Ryô Bunhitsu, also known by his title, Tomiyama peechin, was a Ryukyuan scholar-aristocrat who served as a musician on the 1832 Ryukyuan embassy to Edo.

He died on the way to Edo, at Inaba-juku in Owari province, on 1832/11/3, and was buried the following day at Zuisen-ji, a temple at Narumi-juku on the Tôkaidô. He was one of a number of Ryukyuan officials to die while on such missions in Japan, as the result of what was called Ryûkyû no kaze (the Ryukyuan cold); it is unclear precisely what sort of ailment this was, but it is believed that as Ryukyuans were not used to the colder weather of Japan, they were more susceptible to "catching a cold" (or worse) and falling ill. He was staying along with Vice Envoy Takushi peechin and 19 others at a shogunate-associated lodging in Inaba when he died; there is no evidence in the documents of Bunhitsu being ill for any length of time, so it appears he may have died fairly suddenly.[1]

Two pairs of hanging scrolls featuring Bunhitsu's calligraphy are today held at Zuisen-ji. It is believed that they were brought from Ryûkyû by the 1842 and 1850 missions to Edo, when they passed through Narumi and paid visits to Bunhitsu's grave. One reads, in large characters, 「海清」and「龍飛」 ("pure/clear sea" and "dragon flying"), while the other pair features lengthier poetry, reading 「小梅香裏黄鶯囀 玉樹隠中紫鳳来」and 「白雲深處無塵事 好鳥聞時尽妙音」. Both are signed Chûzan Ryô Bunhitsu.