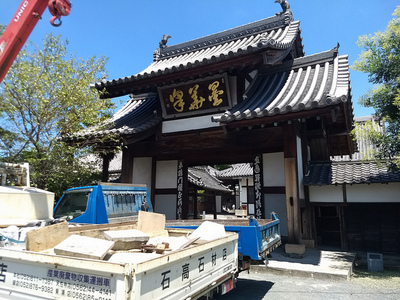 The main gate at Zuisen-ji

Zuisen-ji is a Sôtô Zen temple in Nagoya, in the neighborhood of the former Tôkaidô post-station of Narumi-juku. It was originally established in 1396 by Yasuhara Munenori. The main gate of the temple, designated a cultural asset by Aichi prefecture, dates back to 1756 and was designed in emulation of a gate at Manpuku-ji in Uji.[1]

The grave of musician Tomiyama peechin aka Ryô Bunpitsu is located within the grounds. Bunpitsu (1794-1832) was a member of the 1832 Ryukyuan embassy to Edo who died on 11/3 that year, at Inaba-juku in Owari province, and was buried at Zuisen-ji the following day. The temple also holds several works of calligraphy by Bunpitsu, believed to have been brought to the temple by future Ryukyuan missions (in 1842 and 1850) from Ryûkyû, as they visited their countryman's grave.[2]

A grave for laborers hired by Satsuma han to accompany the Ryukyuan mission was once also located on the grounds.