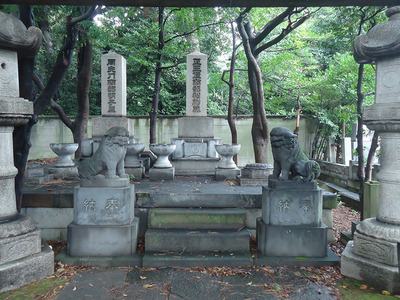 Nanbu Toshihisa was the 40th head of the Nanbu clan, and second-to-last daimyô of Morioka han. He is also known as a poet.

Born in Morioka, he was the third son of Nanbu Toshitada, and the younger brother of Nanbu Toshitomo. He became head of the Nanbu clan in 1849, and then served in a maritime defense post helping to oversee the defense of Hakodate and surrounding areas,[1] and also for a time as Kyoto shugo before being named Sakon'e no chûjô in 1864. He studied under Mamiya Nagayoshi and Esashi Tsunehisa, and rose to the court rank of Upper Third Rank. Toshihisa married Tokugawa Akiko (Matsu-hime), younger sister of Tokugawa Yoshiatsu, lord of Mito han, in 1857.[2]

Toshihisa fought alongside the Ôetsu Reppan Dômei, and lost in battle against the new Meiji government. Declared an enemy of the court, he was forced to forfeit his domain in 1868/9, and to relocate to Tokyo, where he was effectively placed under house arrest. His son Nanbu Toshiyuki, meanwhile, succeeded him as 41st head of the Nanbu clan, and as lord of Iwashiro Shiraishi han.

Following his death in 1896, Toshihisa was buried along with his wife at Gokoku-ji in Tokyo. His son was later buried nearby.