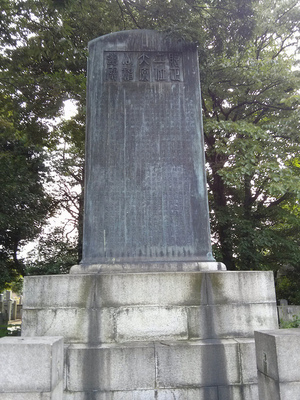 The grave of Ôhara Shigetomi at Yanaka Cemetery in Tokyo

He was born in Kyoto, fifth son of Ôhara Shigenobu. In 1831, he was named to the Junior Third Rank and to the title/post of Ukon'e no gon-chûjô (Middle Captain of the Left Guards). Upon the death of his older brother Ôhara Shigenari in 1838, Shigetomi succeeded to become family head.

Following the coming of Commodore Perry in 1853, Shigetomi came to support jôi discourse, and in 1858, opposed the granting of Imperial support for the Treaty of Amity and Commerce between the United States and Japan, also known as the Harris Treaty. He attempted to escape from Kyoto secretly, in order to join up with former lord of Mito han, Tokugawa Nariaki, but failed.

Shigetomi was named Saemon-no-kami in 1862, and traveled to Edo as an official imperial messenger. He presented Shogun Tokugawa Iemochi with imperial instructions to reform the shogunal government, and to expel the barbarians. As a result, Hitotsubashi Yoshinobu was named the shogun's guardian, and Matsudaira Shungaku seiji sôsaishoku, a similarly powerful government oversight position. Shigetomi became active in the movement to restore the monarchy, and in the so-called kogosho kaigi (Small Palace Conference) on the evening of 1867/12/9[1], while Yamauchi Yôdô, Matsudaira Shungaku, and others debated a government based on public opinion, Shogun Tokugawa Yoshinobu resigned his post, and the return of the lands to the Emperor was decided.

Following the Meiji Restoration, Ôhara served for a time as head of the Office of Justice (keihôkan), head of the Shûgiin house of the legislature, among other positions, but only for a brief time, before resigning his posts in 1870, after which he was dubbed Jakô-no-ma Shikô.

In 1873, he passed on headship of the Ôhara family to Ôhara Shigemi, and in the 11th month that year began the Jakô-no-ma Shikô Conference.

He died on 1879/4/1, a the age of 79, and was posthumously named to the Senior Second Rank. He was buried in Yanaka Cemetery, and Prince Kan'in Kotohito had an Imperial Shinto stele engraved in seal script erected on the site.