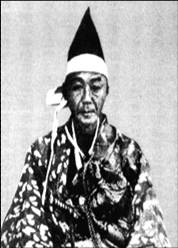 Born as the youngest son into the Mikawa province collateral branch of the Tokugawa clan, Nagai was adopted into a hatamoto family and went on to have a well-rounded career and held a variety of key positions within both the Tokugawa shogunate and Meiji governments. Nagai’s professional positions included being a Confucian teacher and scholar at the Kitenkan Academy in Kofu, a ship captain, an industrialist who built shipyards in Nagasaki, an author and towards the end of his life, a real estate agent. His talents were noticed by the shogunate and served as a police magistrate in tumultuous Kyoto during the early to mid-1860s. Later, he reached the position of Inspector General of the shogunate serving the final shogun, Tokugawa Yoshinobu. As the shogunate forces were systematically being pushed back by the Imperialists in 1868, Nagai retreated to Hokkaido with other pro-Shogunal die-hards and was elected magistrate of Hakodate upon the formation of the short-lived Republic of Ezo. After the cessation of hostilities, Nagai was rehabilitated and called back into government service where he eventually rose to the post of genrô-in.