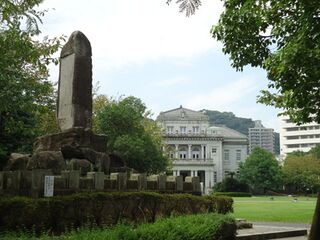 A monument to Kanô Hisayoshi in Kagoshima, with the former prefectural government offices in the background

Kanô Hisayoshi was the sixth governor of Kagoshima prefecture. Known as "the education governor," he implemented numerous plans to improve education, modernizing the prefecture and reviving its commercial production after the destruction and exhaustion of the Satsuma Rebellion.

Originally born into the Tachibana clan, lords of Yanagawa han, he was adopted by Kanô Hisatsune, lord of Ichinomiya han in Shimousa province (Chiba prefecture), to be Hisatsune's heir. Hisayoshi became lord of Ichinomiya at age 19, and after the abolition of the han a few years later, sought positions in government service. After serving in the Ministries of Education and Justice, he was named Governor of Kagoshima in January 1894.

Kanô served as governor of Kagoshima for six years and eight months, one of the longest terms of any to hold that office. Much of his policies were aimed at improving Kagoshima's agricultural production, through a wide variety of new techniques and technologies. These were very successful, boosting the prominence of Kagoshima's products in national markets considerably. He took education very seriously, however, as well, comparing the nurturing of young minds to the nurturing of the crops. By 1897, some 56.3% of school-age children in Kagoshima were attending school (though the national average was 64%); three years later, when Kanô stepped down as governor, school attendance had soared to 92%.

Kanô also oversaw numerous other policies and improvements, including the improvement of local horses, expansion of deep ocean fishing, modernization of Satsuma wares ceramics, repairs & improvement of Kagoshima harbor, the replacement of the Taiheibashi (Pacific Bridge) at Satsumasendai with a steel one, and the establishment of the prefectural library and agricultural school.

He is also known as the "walking governor," as he was known to travel around the prefecture, with waraji sandals on his feet and a bentô box at his hip, traveling even to the Koshiki and Amami Islands, to see local conditions, and speak to local people, himself.

He stepped down as governor of Kagoshima in September 1900, and left the prefecture. In later years, he served for a time as mayor of Ichinomiya, where he had briefly ruled as daimyô decades earlier. Kanô died on February 26, 1919, at the age of 72.