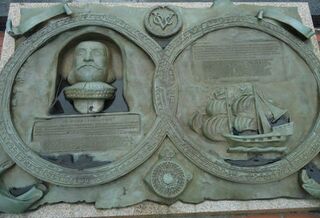 Commemorative or memorial plaque for Jan Joosten, in the Yaesu neighborhood of Tokyo

Jan Joosten van Lodensteiyn was an agent of the Dutch East India Company (VOC), who first arrived in Japan in 1600 aboard the Liefde; he and his shipmates were the first Dutchmen (and the first Englishman, William Adams) to ever travel to Japan.

The Liefde left Europe alongside four other ships, on a mission to challenge the Iberian monopoly in Japanese trade. By the time they arrived in Japan on 1600/3/7, however, the Liefde was the only ship left. Joosten and Adams were among 21 survivors of what was originally a 110-man crew. Most of the others were kept in detention for several months, while Joosten and Adams were granted an audience with Tokugawa Ieyasu on 3/29 (or perhaps 4/10). Ieyasu later took both men into his service, employing Joosten as an interpreter and granting him a 100 koku fief near Nagasaki, and a mansion outside of the Wada Kuramon gate in the Hibiya area of Edo. Joosten was known in Japanese as Yayôsu, and in connection with this, the area near his mansion came to be known as Yaesu.

Once the VOC formally established a factory in Japan in 1609, Joosten began working more actively for them, while also being granted a red seal license and engaging himself in the Southeast Asia trade. Once the British East India Company established its Japanese factory in 1613, Joosten began using his influence with Ieyasu to push for greater Dutch privileges (over the English), to the chagrin of Richard Cocks, head of the British factory. Even so, Cocks is known to have sent gifts to Joosten's wife and daughter in 1616. Little is known about Joosten's Japanese wife, or about his daughter, except that she was old enough by 1622 to get married herself.

In the early 1620s, Joosten attempted to return home to the Netherlands, traveling first to the Dutch East India Company settlement at Batavia. Unable to arrange for passage back to Europe, Joosten decided to return to Japan; however, his ship encountered trouble and broke up while out at sea, and Joosten did not survive.