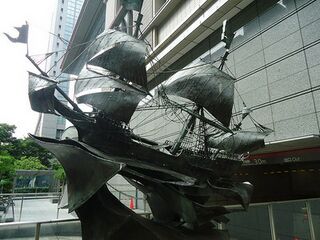 A sculpture of the Liefde near Tokyo Station

The Liefde ("Love") was a Dutch ship piloted by Englishman William Adams, which was shipwrecked in Bungo province (Ôita prefecture) in 1600.

The ship's crew were in their second year of a mission to attack Spanish and Portuguese settlements in Asia and Africa, and to collect pepper, a valuable Southern Asian spice, to bring back to Europe. When they became shipwrecked at Usuki in Bungo province on 1600/3/7, the crew of 24 were half-starved; seven later died of malnutrition. William Adams, Jan Joosten, and several of the other survivors entered the service of Tokugawa Ieyasu and settled in Japan.