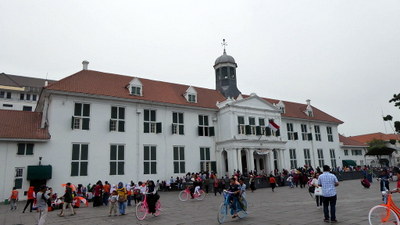 An old city hall of Batavia, today home to the Jakarta History Museum 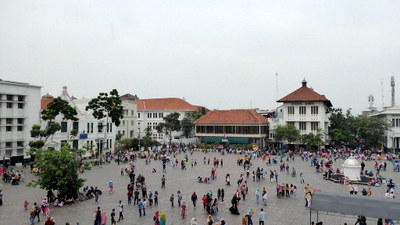 The city was home to roughly 10.37 million people in 2017, and has continued to grow. Extensive construction, extensive draining (use) of the underground aquifers, and other processes, however, have also caused the city to sink, in some places quite dramatically. Though seawalls and the like have been constructed, many areas of Jakarta have already become flooded and have been lost to the sea in the 2000s-2010s. In 2019, the Indonesian government announced a plan to designate or construct a new national capital within the next ten years.

The VOC established a foothold in the area around 1610, and made Batavia their headquarters in 1619. The Council of the Indies (Hoge Regering, or "High Government"), headed by a Governor-General, governed the territory from Batavia.

Batavia was one of a number of cities in Southeast Asia which was home to a sizable Japanese community in the early 17th century. Unlike most of the other Southeast Asian Japantowns, however, which were populated largely by merchants and adventurers, Batavia's Japanese population were largely mercenaries and craftsmen hired explicitly by the VOC to help build the city and/or to work for the Company otherwise. The first Japanese to settle there were 68 carpenters, smiths, and the like brought over by the Dutch in 1613. When the Tokugawa shogunate imposed maritime restrictions in 1639, many people of mixed Dutch/Japanese parentage were forced to leave Japan, and to settle in Batavia. Along with the Japanese, other local and non-native ethnic groups each congregated in their own separate districts of the city, known as kampongs.

The center of old Batavia is today known as Kota Tua, or "old town." A number of the chief buildings organized around the central town square are today maintained or restored as museums. The old city hall of Batavia also housed the court council and municipal council. A Neoclassical building erected beginning in 1627 under governor-general Jan Pieterzoon Coen, the old city hall is now home to the Jakarta History Museum. The second-oldest building on the square is today home to a restaurant known as Café Batavia. And the former site of the Old Dutch Church (and of its successor, the New Dutch Church) is now the site of the Wayang Museum, a museum of Indonesian traditional puppet theatre.