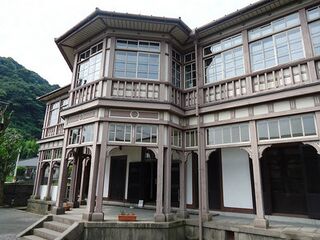 Originally built in the Iso neighborhood of Kagoshima in 1867 as a residence for British spinning engineers, the Iso Ijinkan (lit. "Iso Foreigners' Hall") is a notable example of some of the earliest Western-style architecture in Japan.

The Ijinkan is a two-story wooden building in a Colonial style, with verandas on all four sides, and a tiled roof; in some parts metal roofing tiles are used. It is roughly 14.4 meters in height, and covers a total ground area of 342.7 square meters. Other structures on the grounds included a small stables, outhouse, kitchens, and baths.

Godai Tomoatsu and Niiro Hisanaga led a group of 14 Satsuma students on a tour of Britain, Belgium, France, and Prussia in 1865. In March 1866, Godai and Niiro completed a contract with a group of British engineers, four of whom (including one E. Home) arrived in Japan in November of that year, and began construction on spinning factories. Chief engineer John Tettrow and two other additional engineers arrived in January the following year, and the first modern spinning mill in Japan was completed that May. The engineers came on a two year contract, and were paid 5000 pieces of silver each year; their travel expenses to and from England were also paid by Satsuma han. Godai and Niiro also brought back ten carding machines and six reeling machines from England.

The Ijinkan residence became home to cannon foundries in the early years of the Meiji period, and during the 1877 Satsuma Rebellion was used as a temporary hospital by the rebels. In 1882, the structure was relocated to the former site of Tsurumaru castle, where it served for a time as a residence for teachers at the Kagoshima School (Kagoshima gakkô) and the 7th High School Zôshikan. The residence was returned to its original location in 1936, and came under the control of the city. The building was used by Occupation forces after World War II, but was returned in 1951, and was named an Important Cultural Property in 1962. In 2015, it was named a World Heritage Site, along with a number of other nearby sites associated with Meiji period industrialization.