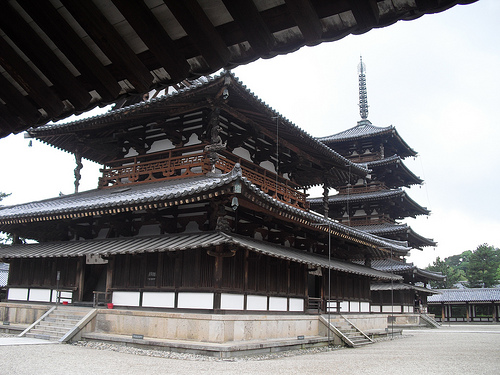 Hôryû-ji, in Ikaruga, just outside the city of Nara, is one of the oldest and most famous Buddhist temples in Japan. The compound includes numerous National Treasures and other structures and objects of great significance; the temple's pagoda and kondô (Golden Hall) are considered the oldest wooden structures in the world, and a pair of terracotta Niô statues at the temple's chûmon (Middle Gate) are said to be the oldest extant freestanding Niô statues in the country.

The temple was established in 607 by Shôtoku Taishi. It was rebuilt in 670, after being damaged in a fire.

Rebuilt numerous times over the centuries, the temple suffered a fire again in 1949 in which a number of 8th century wall paintings were lost, spurring the creation of the 1950 Law for the Protection of Cultural Properties (文化財保護法).[1]

The Western Compound, or Saiin, which contains the pagoda and kondô, is enclosed within a wall broken up by the chûmon to the south, and the kôdô (Lecture Hall) to the north.

The chûmon is four bays wide and three bays deep, while the kondô is five bays wide by four deep. The latter has stairs on all four sides, and a hipped gable roof. The temple's bell tower (shôrô) and sutra repository (kyôzô) are built into the covered corridors surrounding the precinct.[2]

The pagoda and kondô are believed to be the oldest extant wooden structures in the world; dating technology has revealed that the central pillar was made from a tree felled around 594. Unlike most pagodas in Japan, the ground floor of Hôryû-ji's pagoda is open to visitors; as worshippers circumambulate within the pagoda, they view a series of four diorama scenes in unfired clay sculpted in 711, including one portraying the Parinirvana of the Buddha (his death, or his entrance into Nirvana), and one the famous battle of wits between Manjusri (J: Monju), boddhisattva of Wisdom, and the peasant Vimalakirti.

Significant architectural elements of the kondô have been dated to around 670. Both the kondô and kôdô contain numerous Buddhist sculptures of great art historical significance, including a Shaka Triad designed by the sculptor Kuratsukuri no Tori in 623 to commemorate the death of Prince Shôtoku, and a set of sculptures of the Four Heavenly Kings dated to around 650, by Yamaguchi no Atai Oguchi.[2]

The chief structure in the Tô-in (Eastern Compound) is a National Treasure known as the Yumedono, or the Hall of Dreams. The small octagonal structure contains the Yumedono Kannon, a particularly spiritually powerful statue of the bodhisattva Kannon, also a National Treasure, which was kept hidden, unseen by anyone, from shortly after its sculpting in the 7th century, until 1884.

The Shôryô-in, a National Treasure located just east of the Sai-in, is a Kamakura period structure, dedicated to the worship of Shôtoku Taishi.

Of the ten temples originally granted hyakumantô darani in 770, Hôryû-ji is the only one to still hold its collection of the small ceramic pagodas, within which are instances of the oldest printed material in the world.