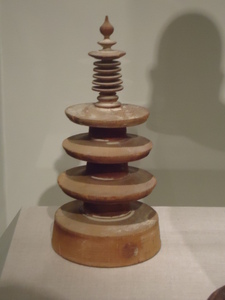 One of the miniature pagodas, on display at the Santa Barbara Museum of Art

The Hyakumantô darani are a series of one million miniature wooden pagodas and the one million copper-plate printed dhâranî (Buddhist charms) slips of paper contained within. They represent the oldest extant printed matter anywhere in the world.

The one million miniature pagodas and corresponding charms were commissioned by Empress Kôken in the year 764, after defeating a rebellion by Emi no Oshikatsu;[1] production was completed in 770. The pagodas are each three stories tall in design; roughly 8.5 inches (21.5 cm) in height. They each contain a rolled-up strip of paper, copper-plate printed with one of four dhâranî charms in classical Chinese, four parts of the full six sections of the Sutra of the Great Incantations of Undefiled Pure Light (J: mukujôkô daidarani kyô; Skt. Vimalasuddhaprabhasa mahadharani sutra). Analysis of the wear in the printing reveals that three sets of blocks or plates were used for the printing (objects printed by the third set are especially rare today); the sutras were printed two to a sheet, which was then cut to produce separate strips to fill two separate miniature pagodas.

The pagodas were distributed in 770/4 to the top ten Buddhist temples of the time, namely Daian-ji, Genkô-ji, Kôfuku-ji, Yakushi-ji, Tôdai-ji, Sadai-ji, Hôryu-ji, Kôfuku-ji (Yamashiro province), Shitennô-ji, and Sûfuku-ji. The million pagodas being divided among ten temples, each thus received 100,000 copies; within each temple, the miniature pagodas were arranged in a particular fashion, with each grouping of ten thousand pagodas headed by a special "commander" pagoda with seven stories, or tiers, and each temple's total group of 100,000 headed by a "general" pagoda with thirteen tiers.

Today, only Hôryuji still holds its collection of pagodas, all the others at other temples having been lost or destroyed. These 40,000-plus pagodas belonging to Hôryû-ji were rediscovered at the temple in the 1880s; roughly 1200 of these were at that time given to various patrons and donors associated with the temple, who in turn sold or donated them, such that a number of hyakumantô darani can today be found in libraries, museums, and other collections around the world.