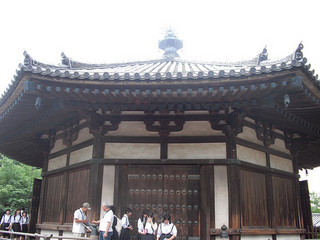 The Yumedono, or "Hall of Dreams," is a small octagonal structure in the Eastern Compound (Tô-in) at Hôryû-ji, famous for the Yumedono Kannon, a 7th century wooden sculpture and National Treasure, contained within.

The Yumedono Kannon, a statue of the bodhisattva Kannon was kept hidden from sight since the 7th century, when, after being carved of a single block of camphor wood, gilded and otherwise prepared, it was wrapped up and hidden away. Literally no one gazed upon this object for over 1000 years, until 1884, when, the Yumedono was opened and the statue unveiled and photographed by Ernest Fenollosa and Okakura Kakuzô. The pair had been authorized by the Meiji government to survey the major treasures of Japanese art, to construct a canon, and to establish a basic narrative of Japanese art history.

Some accounts cast Fenollosa and Okakura in a relatively sympathetic light, emphasizing the fact that they were authorized by the government, and suggesting that they showed their credentials, perhaps even made arrangements ahead of time, and that all went smoothly. This version of the story also emphasizes the fact that Okakura, Fenollosa's guide, assistant, and interpreter, as a native Japanese, was perfectly capable of telling Fenollosa if he thought this an inappropriate or sacrilegious thing to do. If Okakura - who would go on to prove himself a great champion of traditional arts and traditional culture - thought it should not have been done, it would not have been done. Other accounts, however, have it that the monks blocked the pair's entry, and that it was only with the help of the local police force that the scholars forced their way in, totally against the monks' wishes, and forced open the Hall of Dreams.

In any case, in the end, notes and photographs were taken, and the statue was wrapped up again, and placed back into the Hall. Its spiritual power had been severely weakened. Since then, the hall is still kept closed up most of the time, to preserve some of the statue's spiritual efficacy, but it is also opened up for a few days each year to allow visitors to appreciate its incredible beauty and power.