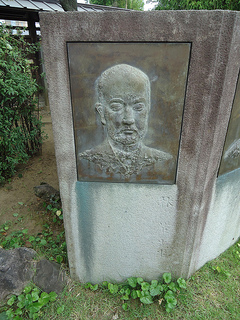 Hayashi Tadasu, as seen on one of a number of monuments to members of the Satô family, at the Juntendô in Sakura

Baron Hayashi Tadasu was a prominent diplomat of the Meiji period and one-time Foreign Minister, who served in England, Russia, and China, and was the chief Japanese official involved in the signing of the 1902 Anglo-Japanese Alliance.

Tadasu was the fifth son of Satô Taizen, founder of the Juntendô in Sakura (in modern-day Chiba prefecture). At the age of 12, in 1862, he moved with his father to Yokohama, and was adopted by Hayashi Dôkai, a court physician in service to the Tokugawa shogunate. There in Yokohama he studied English under American missionary Clara Hepburn, the wife of James Hepburn (designer of the Hepburn romanization system for Japanese).

Tadasu earned support from the shogunate to study abroad at the University of London in 1866. Following his return to Japan, he took part in the 1868-1869 Battle of Hakodate (part of the Boshin War), and was captured, but later regained his freedom, and accompanied the Iwakura Mission to Europe and the United States in 1871.

Following the Iwakura Mission, he served in a variety of positions as an official of the Meiji government, including posts in the Ministry of Industry, and as governor of Hyôgo and Kagawa prefectures. He was appointed Vice Minister of Foreign Affairs in 1891, and later Japanese Consul-General to Russia, Qing Dynasty China, and the United Kingdom for brief periods. While in England, in 1902, he concluded the Anglo-Japanese Alliance, which continued to serve as a key element of Japan's foreign relations stance until 1923. Tadasu afterwards served as Minister of Foreign Affairs, and Minister of Communications and Transportation, and was named a Baron (hakushaku) in 1907. He died in 1913.